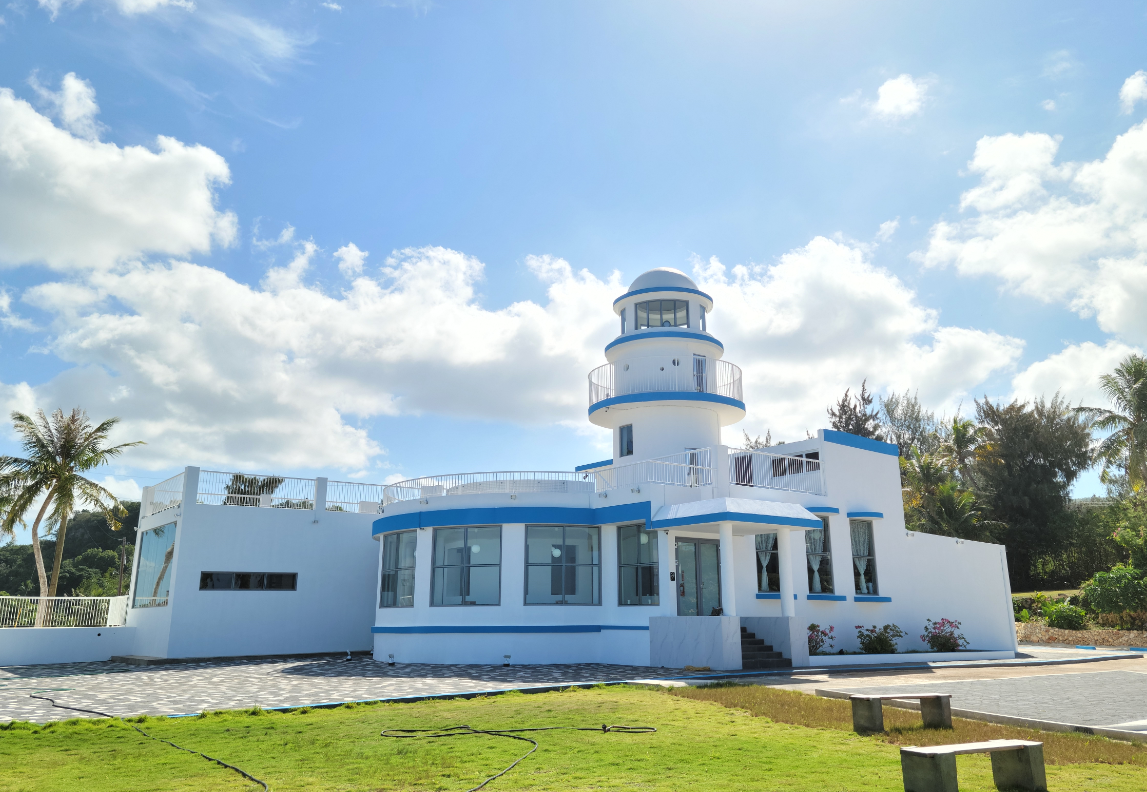 Mariana Lighthouse on Navy Hill overlooks the downtown area and the Saipan lagoon.

Mariana Lighthouse on Navy Hill overlooks the downtown area and the Saipan lagoon.

THE newly renovated lighthouse on Navy Hill will have a “soft opening” Friday, March 12, as Mariana Lighthouse.

The lighthouse was built in the early 1930s during the Japanese administration of the NMI.

Damaged during the U.S. invasion of the island during World War II, the lighthouse was rebuilt by the U.S. military and was listed on the National Register of Historic Places in 1974.

In 1990, the lighthouse was renovated and turned into a restaurant, which shut down in the mid-1990s. The abandoned lighthouse was proposed to be the location of a visitor center for the Marianas Trench Marine National Monument in 2010.

Bibong Corp. financial controller John Park said when Lee first visited the lighthouse, he fell in love with it. Lee believes that it could be a great place to bring residents and visitors together.

His company submitted a proposal to the Department of Public Lands, and after the process produced no other bidders, the lighthouse was leased to Bibong Corp.

“Our initial plan on the construction was quite small, but along the way, it just became bigger and bigger,” Park said.

In light of the global Covid-19 pandemic, however, the plan for the reconstruction of the lighthouse slightly changed.

At first, Park said they thought that the pandemic would go away in a matter of months, and so their plan for the lighthouse still pushed forward.

However, as the pandemic continued, it became evident to the company that the project would be delayed primarily because of the toll the pandemic had on the global economy.

“It didn’t really affect us in the beginning, but the thing is, due to the Covid-19 pandemic, there are no flights, there is no shipping, so getting materials and getting the workforce here was quite hard. It actually delayed our completion date by about six months,” said Park, noting that the initial completion date was July-August of last year.

“Everything got delayed… We thought that by this time, tourism would open again and everything would go back to normal, but I mean, even now, no one knows when Covid-19 is going to go away.”

With its soft opening today, he said the company will be able to assess what works and what does not work in terms of its operations, based solely on how the day goes.

Park, on behalf of the company, thanked community members for their patience and understanding as the Mariana Lighthouse continues its preparation for its grand debut.

“We’re just hoping that the customers will understand that this is only the beginning. We’re trying out a lot of things to figure out the right method of doing things. In the beginning, there will be a lot of confusion, but hopefully, we can figure it out within the soft opening period, and have a grand opening soon,” Park said.

In a span of two weeks, Mariana Lighthouse has put together a team of about 20 staff, including eight servers, five baristas, four cooks, and looks forward to hiring more when deemed necessary.

For the time being, Mariana Lighthouse will be offering Western-style brunch, lunch, and dinner options.

As time progresses, additional cuisines will be offered, Park said.

About 100 to 150 people can be seated as of now, but the company intends to expand capacity in the foreseeable future.

No reservations are being taken at this time. Mariana Lighthouse encourages community members to visit and experience the restaurant, coffee shop and pub for themselves.

“We would like to show the locals what we have done with the lighthouse and hopefully they can come and enjoy. They can compare what it was before and what it is now, see how much it has changed, and even provide us with feedback,” Park said.

The bar and grill are located outdoors, while the restaurant and coffee shop are indoors, featuring a section where customers can learn more about the history of the lighthouse.

Patrons are also welcome to visit the second floor of the lighthouse where locks will be provided by the Mariana Lighthouse for them to write a message and place the lock in an area designated for the customized locks.

At this time, for safety purposes, the top level of the lighthouse is closed to the public.

An earlier version of this article erroneously stated that the lighthouse was not rebuilt after the war.

K-Andrea is a Gates Millennium Scholar who earned her bachelor of arts degree in political science from St. Francis College in Brooklyn, NY. Since joining the MV team in Feb. 2020, she has been covering the political, environmental, and community beats.