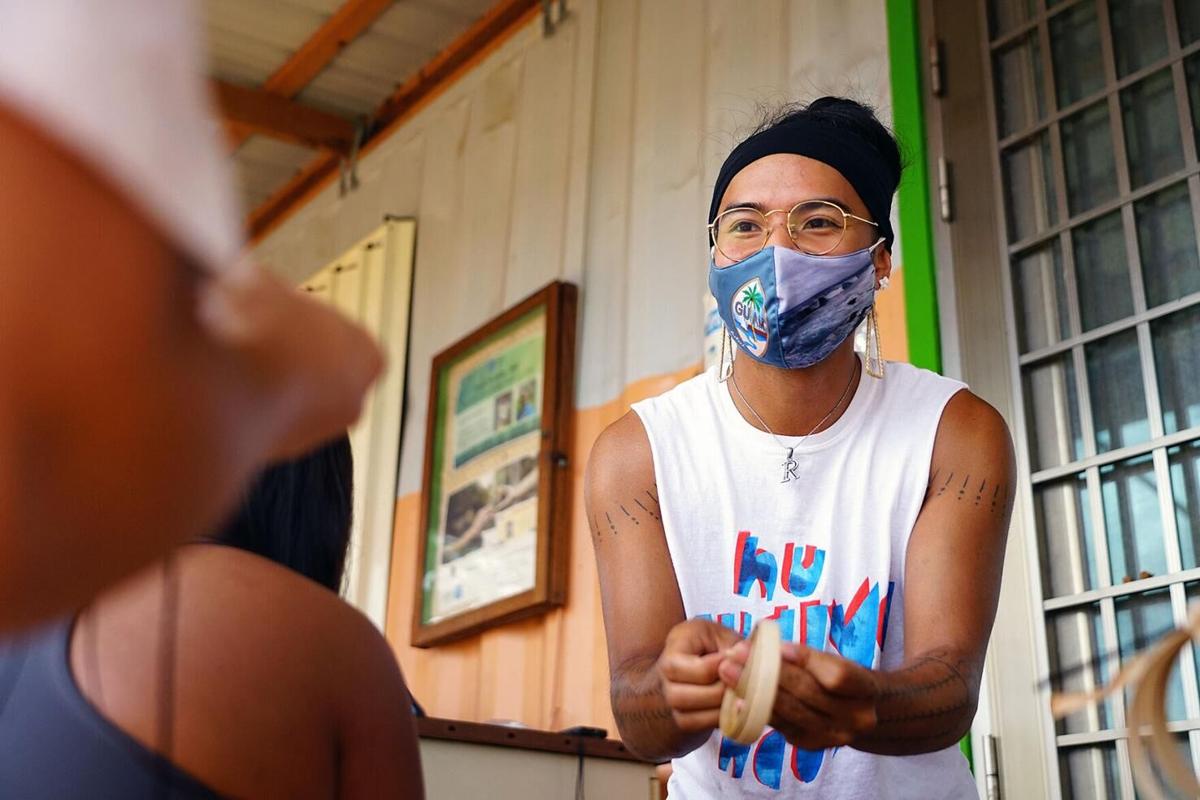 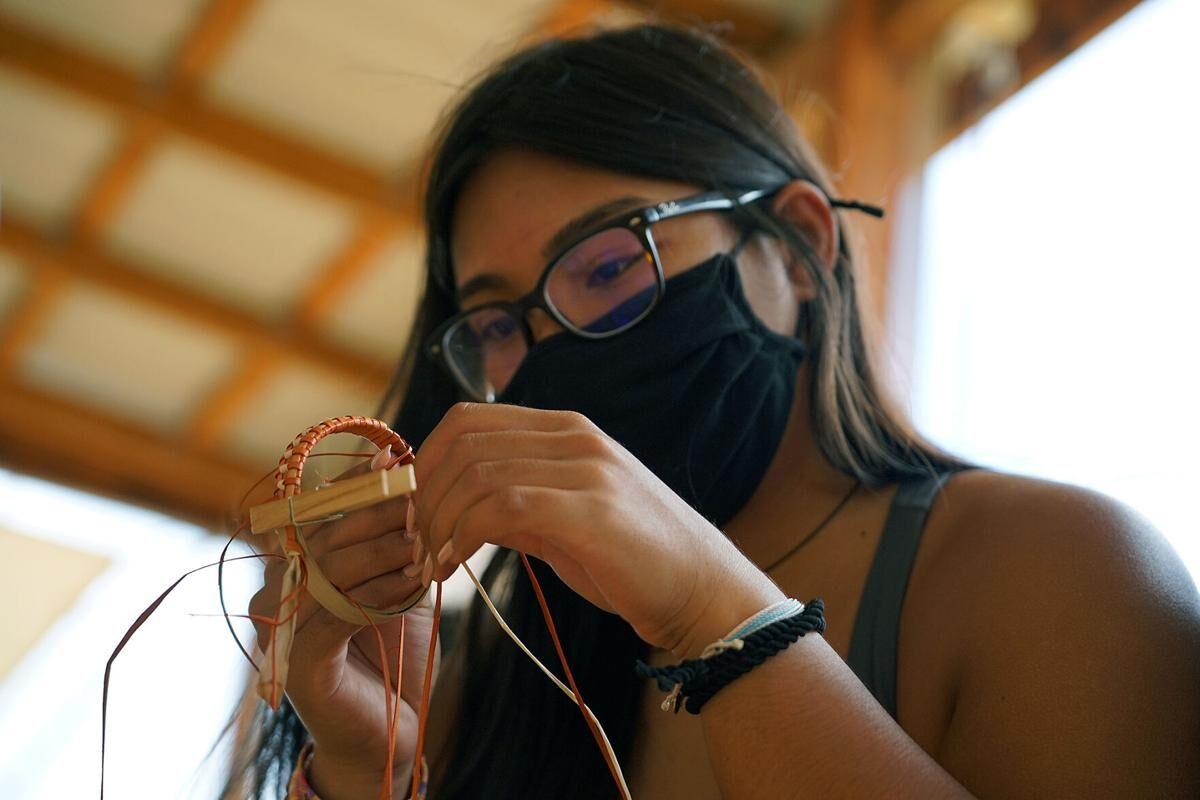 Ahmyia Cacapit, a returning student of Roquin-Jon Siongco, adds the finishing touches to her woven bracelet during a workshop at Sagan Kotturan Chamoru Cultural Center in Tumon, Guam on Saturday.

Ahmyia Cacapit, a returning student of Roquin-Jon Siongco, adds the finishing touches to her woven bracelet during a workshop at Sagan Kotturan Chamoru Cultural Center in Tumon, Guam on Saturday.

“I’d like to think I am pretty good at weaving,” Siongco said. “I’ve been doing it for about 10 or so years. I started as a little kid in CHamoru class and was really intrigued by it.”

The 23-year-old Yigo resident said his first piece was a little grasshopper that he made at school.

Siongco said the art form was also something that he continued to do even when he lived off island in Washington.

As Guam celebrates Mes CHamoru this month, he hopes to get more people interested in weaving.

“We are pretty rare,” he said. “It's not as commonly practiced as say carving. But I'm hoping that by continuing to do good work and by having a lot of teaching moments accessible to folks, people will find the joy in it. I don’t see it as a mandatory skill if you're CHamoru. But more-so as something that should be as common for us as knitting, crocheting or beading is in other communities.”

His passion for the art has also allowed him to showcase his skill to places far beyond the Pacific, and he has even made money selling his unique pieces.

“I've done numerous exhibitions and showcases, in the states and internationally,” he said. “But it's not about how big the check is - it's about the work I believe in. Being able to share a piece of home while exploring the art form. Occasionally, I get "but it's just leaves" paired with them trying to negotiate my prices. But what they're leaving out is the time and skill that goes into the work.”

Weaving continues to be an important practice on Guam. For thousands of years CHamorus have used Guam’s abundant foliage to produce useful and unique items, according to Guampedia.

Some of the materials traditionally used on Guam include the pandanus leaves or åkgak, and the coconut leaves or niyok.

“When I'm home in Guåhan I have some spots and friends that grow leaves. Both åkgak and niyok. I'm working on growing a garden myself,” he said. “But when I was out stateside, there was one company where I'd order coconut leaves from. They'd ship out of Florida and take about a week to get to me in Washington. I'd always have to time it with my workshops because there is a narrow window of being able to work with them. And I'd have friends from all over send me different kinds of pandanus. Best thing about that one is that once it's processed, it keeps forever. Then again, I use it so fast that I've never had any rolls that have had the chance to last forever.”

“But people can still do amazing stuff with yarn or whatever they find around them. There’s this practice of weaving called free form where you take whatever is around you and make a big tangle. Weaving is nothing but an organized tangle. It’s just very neat,” he said.

Siongco is spending this Mes CHamoru giving back to others. He is with the group, Guma' Ge'la, who are hosting a variety of workshops at Sagan Kotturan CHamoru in Tamuning this month.

“A lot of people come up to me and say they want to learn how to weave because it’s what it means to be CHamoru. I’m like, 'that is not defining of what CHamoru is' and just because I’m a weaver that doesn’t necessarily mean I know how to fish or carve. Not one person can hold the entirety of the culture. We all hold different pieces of the puzzle. I just focus on that and try to share it with anyone who has an interest in it,” he said. “Not growing up speaking the language but having my hands do this dance as our people have been doing since ever since. Even before we were CHamoru, weaving is a practice all around the world. It just looks different because people have different access to materials, people needed to do different things.”

Siongo showed participants at his most recent workshop how to make bracelets.

“My favorite piece is the next one that I am going to make,” he said.

He encourages more people to get involved in learning about their CHamoru history and culture, especially during this time of year.

“It’s been great to see a lot of people with a resurgence of things like carving and the language. I just encourage people to try weaving. Just know there is no wrong way. There’s definitely a fixation on technique and what it looks like, but honestly if it’s doing what it’s supposed to do then you are there… There is a common foundation set of skills and knowledge but there is also times where you can just figure it out and play around. Remember the fun in it and don’t feel the pressure of this being something you have to do. Keep learning.”