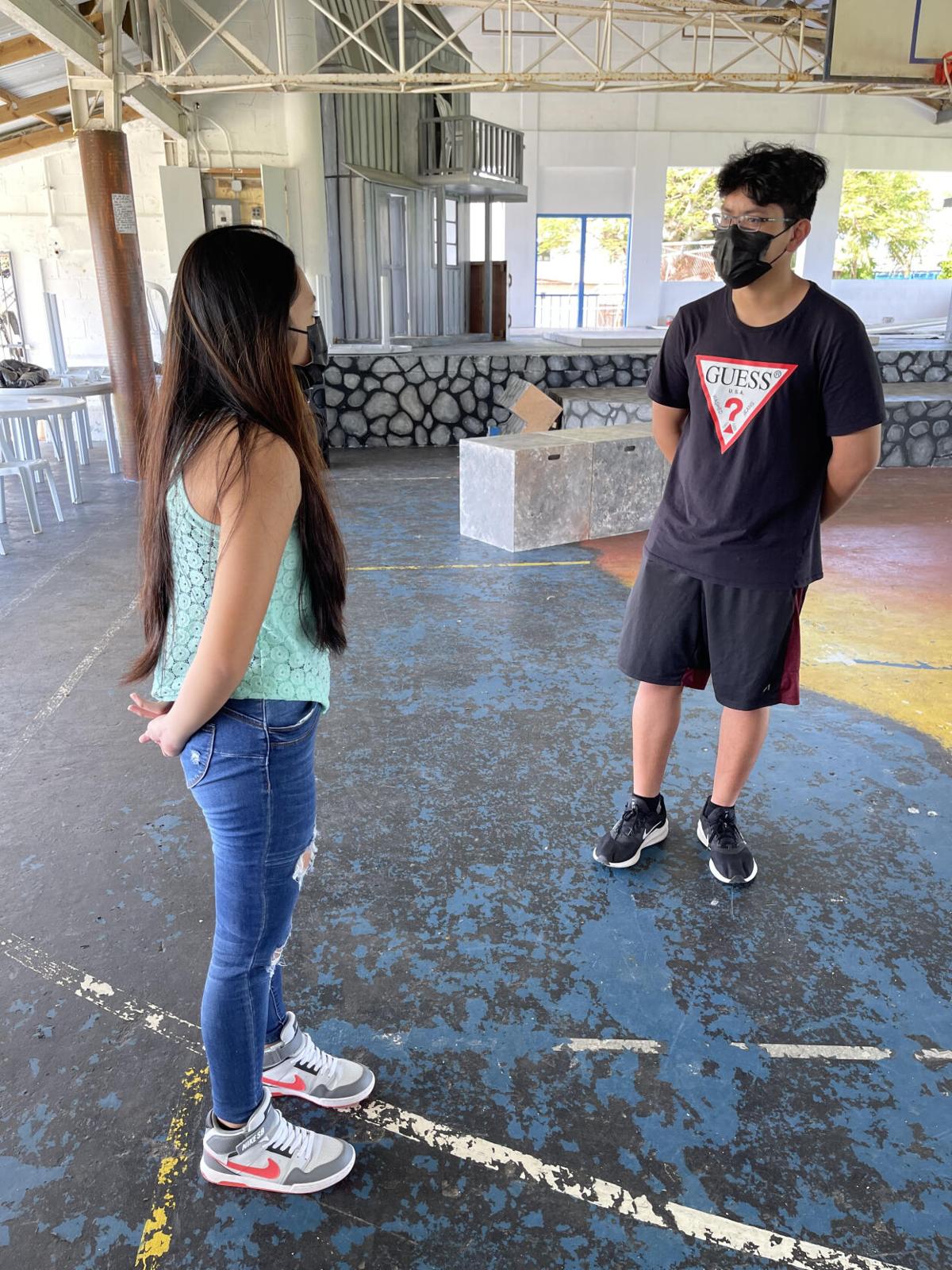 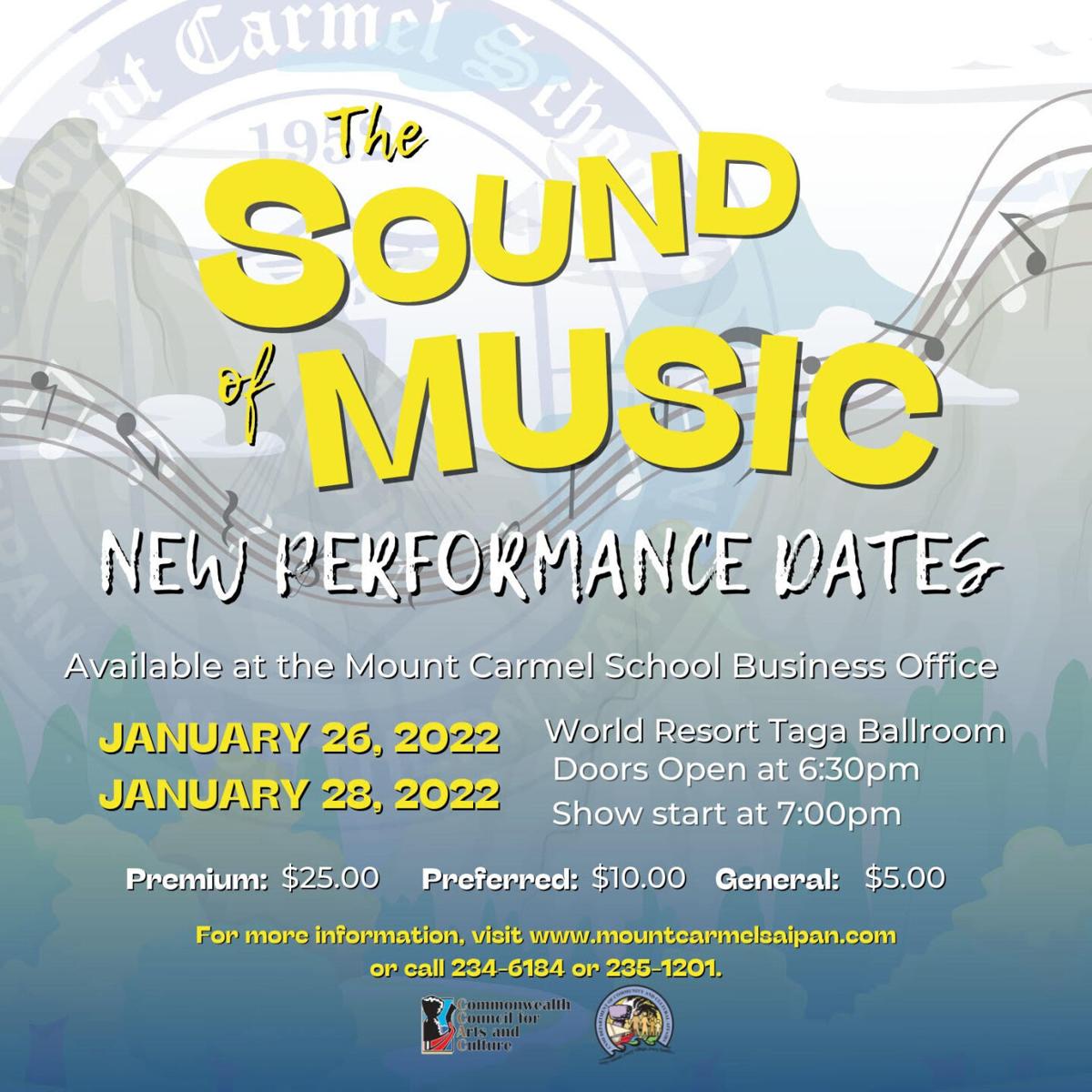 (MCS) — When Mount Carmel School’s Theatre Club presents “The Sound of Music” on January 26 and 28, the show will be groundbreaking on many fronts— for the lead actors, for the community, and the club itself.

A first for the lead actors

The show’s lead roles of Maria and Captain Georg von Trapp are both being played by two new-comers to the club, Sophomore Bernice Shane Sabino and Junior Manuel Pangelinan, respectively.

Sabino is not only new to the club, but she is also new to the school. However, that did not deter her from auditioning. She said, “This is my favorite show of all time, so when I saw the announcement, I auditioned right away!”

Since landing the role, Sabino admitted, “I was actually surprised at first because it was really difficult, especially with all those lines and working with a performing group that pays so much attention to details.” Still undeterred, she added, “At the same time, it’s a new experience for me working with everyone, one I’ve really enjoyed, and I can’t wait to help the audience feel the same joy I feel about this show.”

For Pangelinan, he only auditioned to help backstage as a crew member. But, when he learned he was cast for one of the leading roles, he said, “I was shocked because I didn’t think I would get the role.” Despite the surprise, Pangelinan said, “At first, I was worried about how I would do, but after three months of rehearsing, I’ve learned a lot.”

In particular, Pangelinan has enjoyed working with everyone. As he said, “The best part of this whole process is meeting a lot of new people, making new friends, and growing as a person.” He added, “And this show is really important, and I hope that the audience will be taken away from the real world and put into this new world full of love, happiness, and music.”

A first for the community

This will also be the first time that “The Sound of Music” will be staged on-island. For 25 years, the MCS Theatre Club has brought several groundbreaking productions to the community, including plays by William Shakespeare, Disney musicals, and award-winning films, including the “We Drank Our Tears” film series, which was recently featured in the Guam International Film Festival.

The show’s director and president of Northern Marianas College, Galvin Deleon Guerrero, is excited to bring the show to life. “Despite the Theatre Club’s long track record, it has always been my dream to bring this beloved show to our community,” said Deleon Guerrero. The 1965 movie based on the Broadway original and starring Julie Andrews as Maria and Christopher Plummer as Captain von Trapp has many devoted fans, young and old, who regard it as their favorite show of all time. “I know that expectations will be high, but our students are amazing and, with everything happening in the world, our community needs this, now more than ever.”

Given how ambitious the production was, it took almost a year of work to secure the license to perform the show. The restrictions and school closures related to the Covid-19 pandemic also caused severe setbacks in rehearsals and other aspects of the show. Despite it all, the cast and crew have pushed through. As Deleon Guerrero put it, “It’s been unimaginably difficult, but it will be so worth it to bring the joy and the magic of this timeless classic to our community.”

A first for the club

As the school’s Theatre Club celebrates its 25th anniversary, “The Sound of Music” also marks the club’s first time that it is fully collaborating with the school’s award-winning concert band led by maestro Julian Greening. Anticipating that the band would play the music for the show, Mr. Greening had band members start working on the show’s song’s over a year ago in various concerts. As Greening said “This is a big show and we look forward to giving it the music it needs to be a success.”

Deleon Guerrero, recalls when he first hired Mr. Greening back in 2017 as the president at the school. He said, “In addition to launching the school’s music program, it was always our hope to collaborate with the band to bring this musical to life.” The club has collaborated with many other bands in the past, including the University of Guam Jazz Band with Dr. Randy Johnson, the Guam Territorial Band with Max Ronquillo, and the Saipan Southern High School Manta Ray Band with Will DeWitt. “The Sound of Music” will be the first time that the school’s Concert Band will perform with the Theatre Club.

Launched in 1996, the MCS Theatre Club began celebrating its 25th anniversary last year, commemorating over 50 theatrical and cinematic productions. The club started the celebration in February with the sold-out premiere of the latest entry in its award-winning “We Drank Our Tears” series, the “Stories of Visitacion, Henry, and Dave” at American Memorial Park. The club continued the celebration in April with William Shakespeare’s “As You Like It” and in May with the feature film “Zero2Hero,” a follow-up to 2011’s cult hit, “Zero to Hero.” The film was also recently released for free on the school’s YouTube channel.

“The Sound of Music,” with music by Richard Rodgers, lyrics by Oscar Hammerstein II, book by Howard Lindsay and Russel Crouse, as suggested by “The Trapp Family Singers” by Maria Augusta von Trapp, is presented by arrangement with Concord Theatricals on behalf of The Rodgers & Hammerstein Organization.

“The Sound of Music” will be presented at Saipan World Resort on January 26 and 28, 2022, with doors opening at 6:30 p.m. Tickets are $25 for front row premium seats, $10 for preferred seating, and $5 for general admission. Tickets can be purchased at the school’s Business Office. To comply with Covid-19 Mitigation Guidelines, tickets are limited and are available only on a first-come, first-served basis.

The production is made possible by support from the CNMI Department of Community and Cultural Affairs and the CNMI Council for Arts and Culture with funding from the National Endowment for the Arts. For more information, call 234-6184 or visit www.mountcarmelsaipan.com