You are the owner of this article.
Edit Article Add New Article
You have permission to edit this article.
Edit
Variety
Home
News
Views
Sports
Business
Arts & Culture
Announcements
Obits
Multimedia
Buy & Sell
Share This
1 of 6 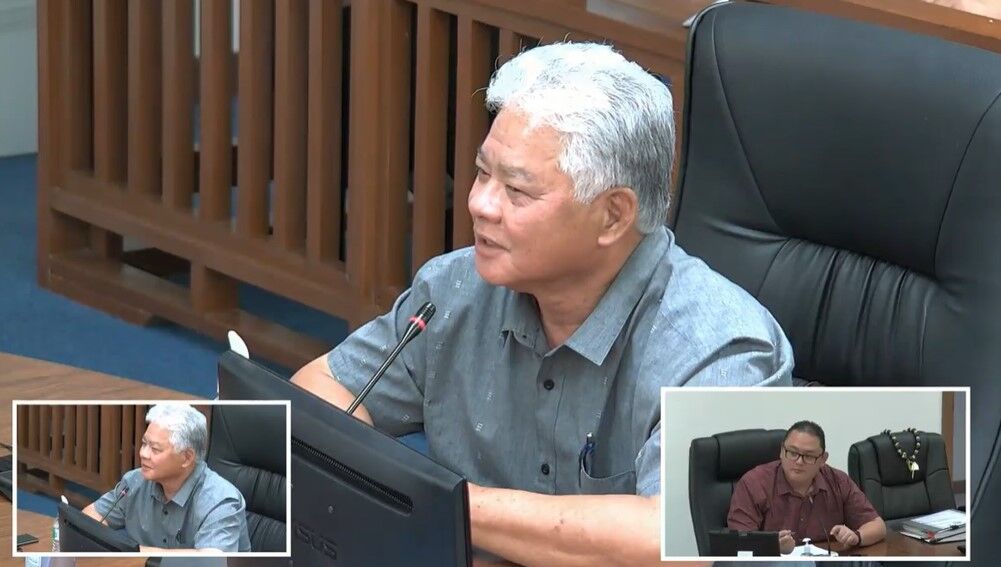 In this photo taken from a video, Lt. Gov. Arnold I. Palacios reacts after hearing the question of Rep. Donald Manglona, right inset, during a House committee hearing Wednesday in the House chamber. 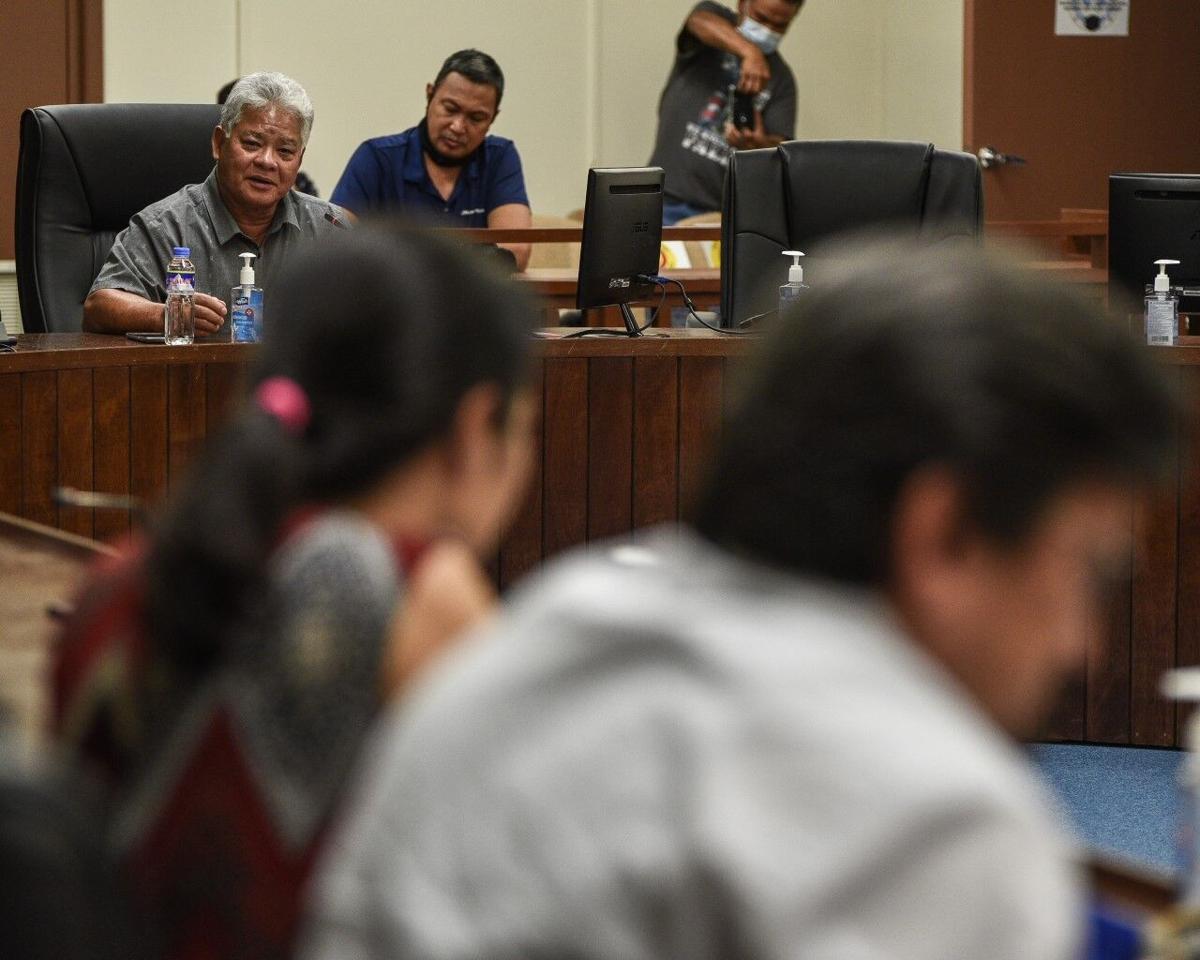 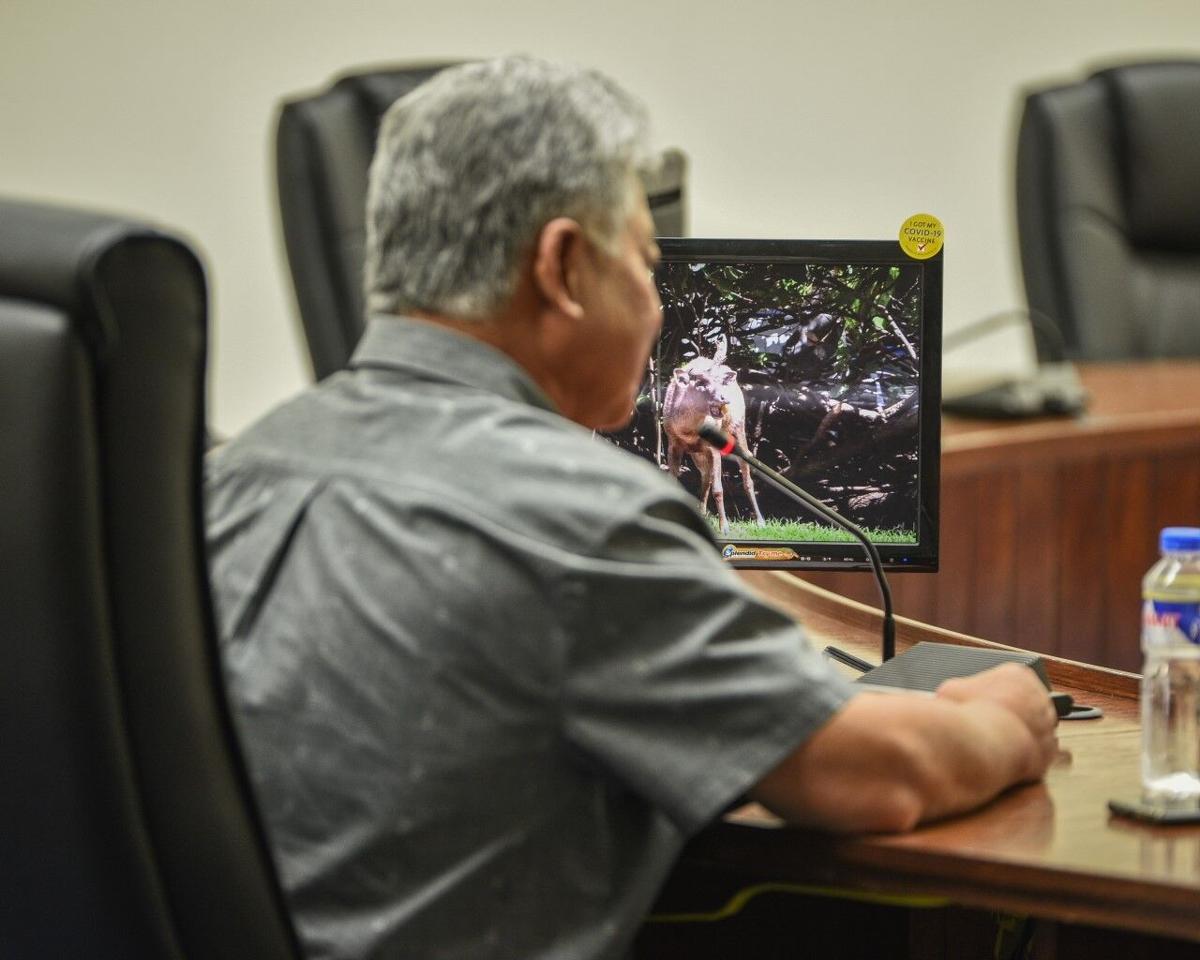 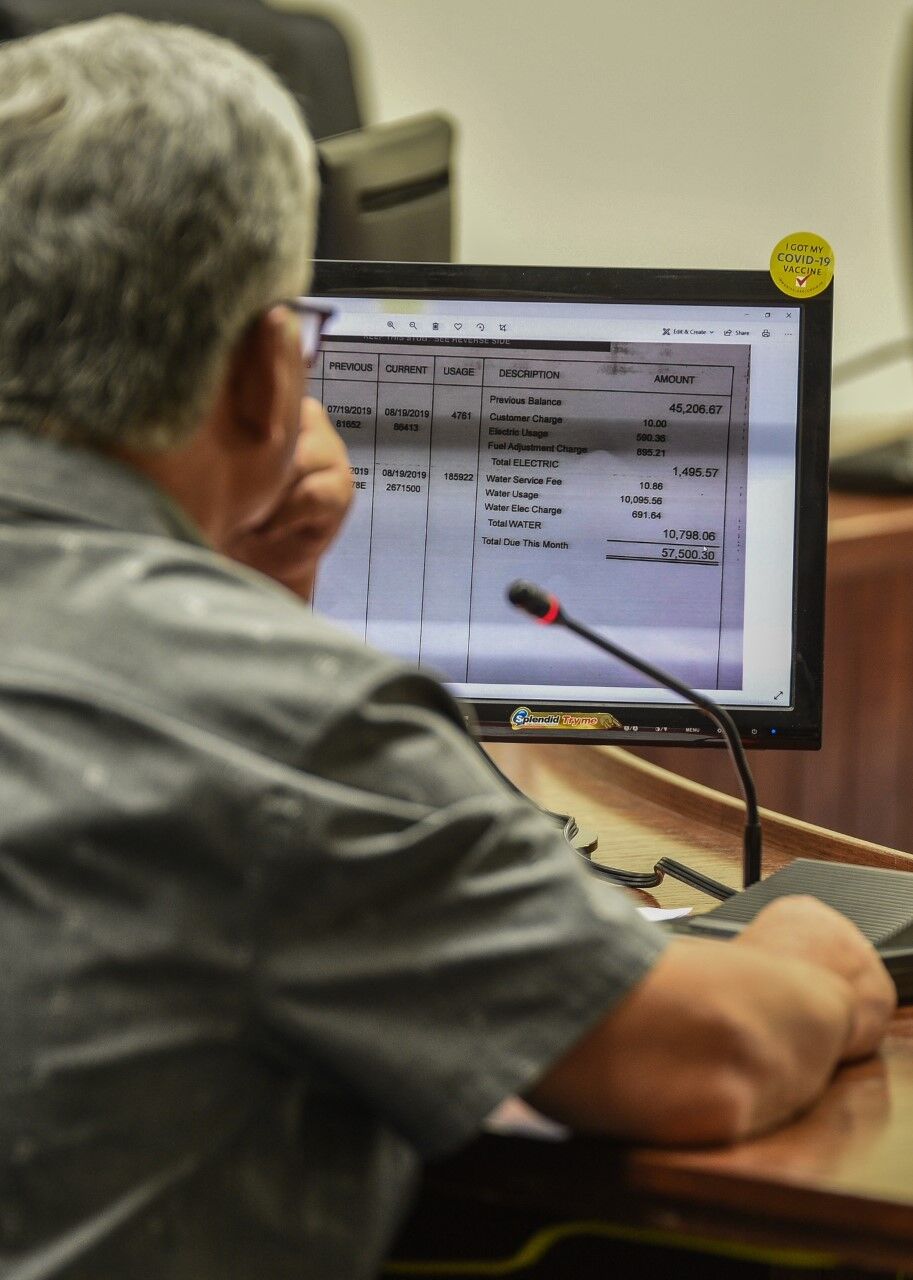 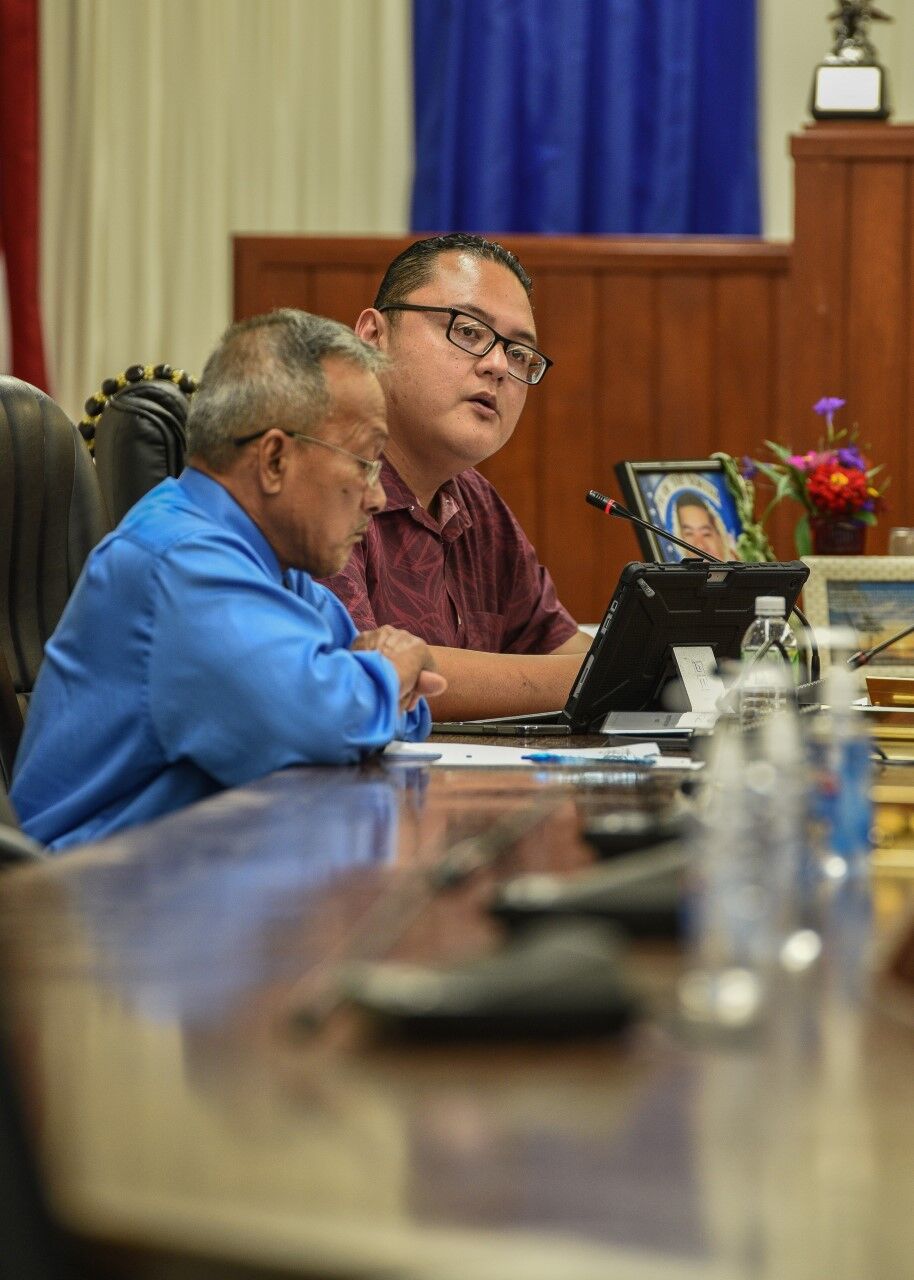 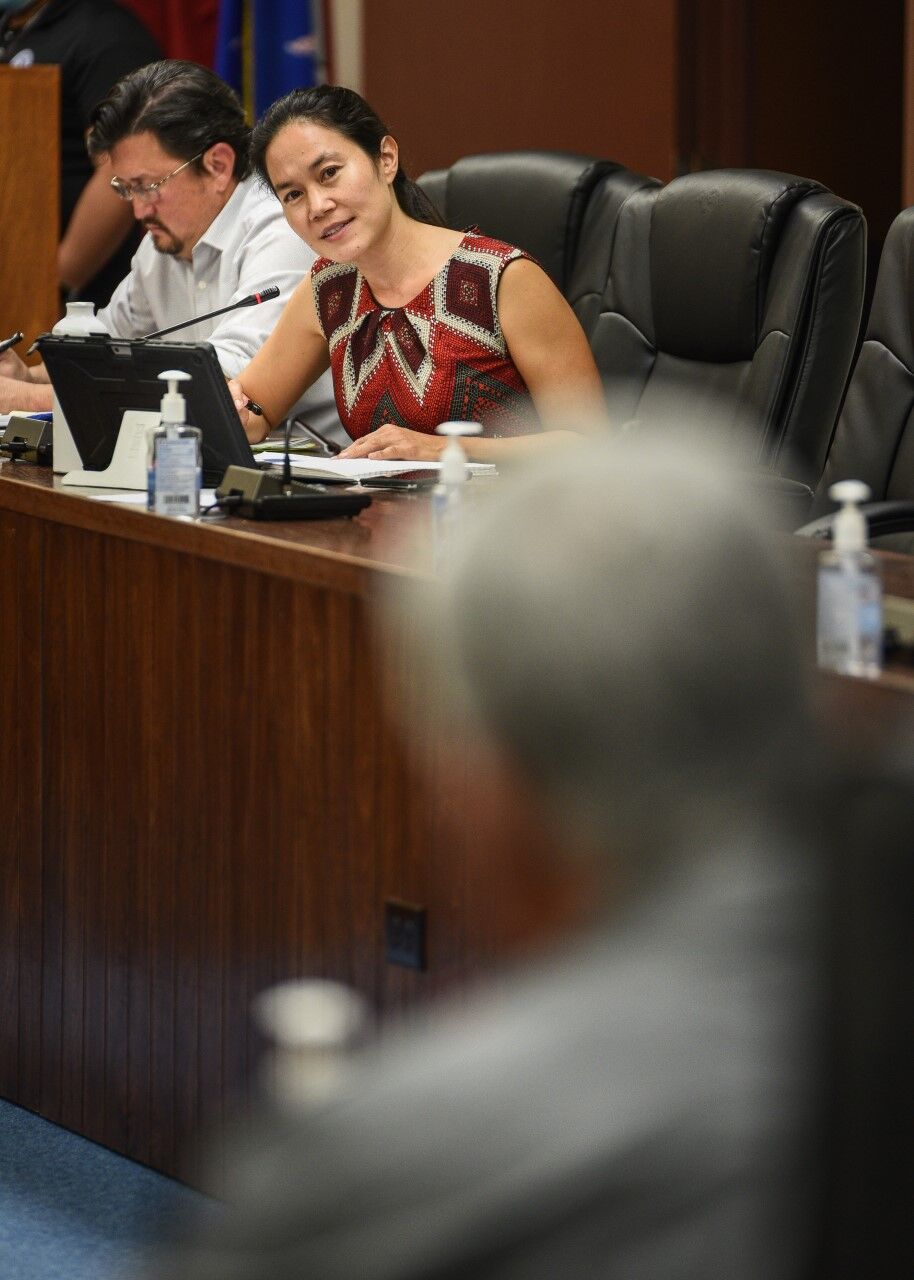 In this photo taken from a video, Lt. Gov. Arnold I. Palacios reacts after hearing the question of Rep. Donald Manglona, right inset, during a House committee hearing Wednesday in the House chamber.

SAYING that “there’s a dark cloud hanging over the CNMI,” Lt. Gov. Arnold I. Palacios testified Wednesday before the Democrat-led House Judiciary and Governmental Operations Committee, and agreed with most of its members’ statements regarding what they allege are Republican Gov. Ralph DLG Torres’ extravagance, misuse of public funds and resources, questionable awarding of sole-source contracts, approval of overtime pay for cabinet officials, among other controversial public expenditures.

Palacios also said that he neither “spilled the beans” nor “threw” the governor “under the bus.”

“You have the ‘beans’ in your offices, in boxes of information you obtained from [the Department of] Finance through the Open Government Act,” he told the committee members. “I didn’t bring the beans. You have the right to look into the matter. And I didn’t throw him under the bus. He ran in front of the bus.”

Palacios said the governor should “come before this body. I hope he does, I really do. He says he has nothing to hide. The buck stops there.”

When asked by the committee chair, Rep. Celina R. Babauta, why, unlike the previous witnesses, he didn’t have counsel, the lt. governor said: “I don’t believe that the matters that are going to be discussed or the questions that are going to be asked require me to have counsel. And if I do believe that there’s a question that I may not be able to answer without a counsel then I’m gonna ask the committee to excuse that, but I come in response to the subpoena without a counsel today.”

The previous witnesses were mostly government employees or officials working for the administration.

“Let me be candid with you. I never thought when I took the oath of office of the lt. governor that I would find myself in this position, having to respond to a subpoena to appear before this committee. I do so with much hesitancy…. To be at the center of your investigative proceedings places me in a very awkward position as lt. governor, but I am here…. The oversight responsibility of the Legislature I acknowledge as an important part of the checks and balances system upon which our Commonwealth was founded. I respect that and your role as legislators and members of a co-equal branch of government. I respect this process…. I will do my best to answer your questions to the best of my ability based on what I know.”

Many of the committee members asked similar “leading” questions, but the lt. governor answered them all.

He agreed with their statements regarding the governor’s reimbursement requests, first-class travels, the promotional trip to the Northern Islands, the use of government boats, including those that are federally funded, for recreation.

When he was shown some of the governor’s utility bills for which he is reimbursed by the CNMI government, the lt. governor agreed that they were excessive.

Asked by Rep. Edwin Propst if it is “an abuse of office to rack up excessive utility usage paid by the public,” Palacios replied, “On the face [of it], yes, absolutely; it’s crazy.”

Asked by Rep. Vicente Camacho if the governor is misusing public funds, Palacios said: “It would appear to be [but] whether he is I will not pass judgment [but] it points that way. Maybe one of these days he would come to this chamber and clarify everything. Until that time, dark clouds still linger over these expenditures.”

He said, “There are concerns — we should be concerned.”

Asked by Propst if the governor can be trusted with federal money, the lt. governor said: “I don’t think that’s a fair question to ask. [But] we continue to make mistakes and not learn from it. I don’t know, maybe it’s because we’ve had disaster after disaster. We should figure out a better way.”

Asked by Rep. Tina Sablan if he believes that the governor is “enriching himself and others,” Palacios said: “If you don’t mind I'd rather not answer that question.”

“I don’t want to speculate. I’m hoping that’s not the case. At the same time there are issues…we have to be concerned about. I don’t want to pass judgment on that until we get more information.”

When Committee Chair Babauta asked Palacios if there should be calls for the governor’s immediate resignation or impeachment, the lt. governor said, “I wish I could give you a short answer to that. I would leave that to members of this body to discern what has to be done. You have many options and alternatives.”

Babauta then reminded Palacios about the day the FBI raided the governor’s office in November 2019.

“Your opinion?” she asked.

“That was a sad day for the Commonwealth as a government and as a community. It took me four hours to recover from that shock,” Palacios said. “I hope things will work out for the governor and this community. We’re still dealing with that. That was a first…. [It] was a very, very rude awakening for the people of the Commonwealth. I was dismayed and almost embarrassed to face the public through the media, but I had to. I hope for the sake of the Commonwealth that we come to a closure on that particular issue. I hope the governor will come out of this situation without any criminal charges brought upon him.”

“Is there an erosion of public trust in this administration?” Babauta asked.

He said after his testimony, he could be “the most unpopular person in the administration,” but “I’m glad I came. I want to thank you for this opportunity…. Tonight I will sleep well. Last night I didn’t; I didn’t know what questions you would ask. You have a lot of work ahead of you.”

The committee members, for their part, praised Palacios for his “service,” “statesmanship” and “honesty.”

The hearing started around 10 a.m. The committee then recessed for lunch and resumed the hearing after 2 p.m. It ended about two hours later.

Babauta said the next hearing is set for Tuesday, Sept. 21 at 10 a.m. with CUC Executive Director Gary Camacho as witness.