CITING the expiration of the statute of limitations among other reasons, Chief Prosecutor John Bradley on Wednesday informed Attorney General Edward Manibusan that the Office of the AG’s criminal division will not prosecute Rep. Edwin Propst who has been accused of sexual misconduct.

In a memorandum, Bradley said the Department of Public Safety “initiated an investigation into allegations that Propst had engaged in sexual contact/intercourse with several underage females approximately 20 years ago while employed as an educator for Marianas High School and Northern Marianas College.”

Bradley said the investigation “identified eight potential female victims, all but one of whom provided some details of the allegations. The names of the women are not being released, as that is the practice for victims of sexual assault and they have all indicated they do not want to pursue any charges or become identified in public after so many years after the incidents.”

Bradley then provided pertinent details regarding each of the allegations.

He said one of the alleged victims told investigators that in 1989, when she was 14, Propst was intoxicated and got on top of her in her home.

She said he resisted her efforts to push him off, and attempted to touch her by trying to spread her legs. But after she screamed, “he got off her and left.”

From NMC, Bradley said investigators obtained “undated notes of a meeting between Propst and NMC administrator, regarding a complaint by an unnamed student. The records provide no indication of any hearing or action taken. The records reflect that NMC had written policies prohibiting sexual harassment and a process for filing and hearing complaints.”

As for MHS, Bradley said it has “no records of complaints or administrative action against Propst by the high school. The records reflect that Marianas High School had written policies prohibiting sexual harassment and a process for filing and hearing complaints."

Bradley said the allegations raised in the DPS report focus on incidents that occurred some 20 years ago. “At that time, the CNMI laws regarding sexual offenses were quite different from today,” he added.

“In applying these legal principles to the limited facts available in the DPS report,” Bradley said, “the Office of the Attorney General must conclude that successful prosecution is unlikely. Several of these incidents did not involve a crime because the victims were 18 or older and seemingly provided consent. For those incidents that potentially establish probable cause to believe sexual crimes occurred, the passage of substantial time, expiration of the statute of limitations, and the desire of the victims for confidentiality weigh against prosecution.”

Bradley said, “While the information in the DPS report seems to confirm the concerns raised by the information received by DPS, there is insufficient factual information and legal justification for pursuing a criminal prosecution. The Office of the Attorney General, therefore, closes this case against Propst by declining prosecution.” 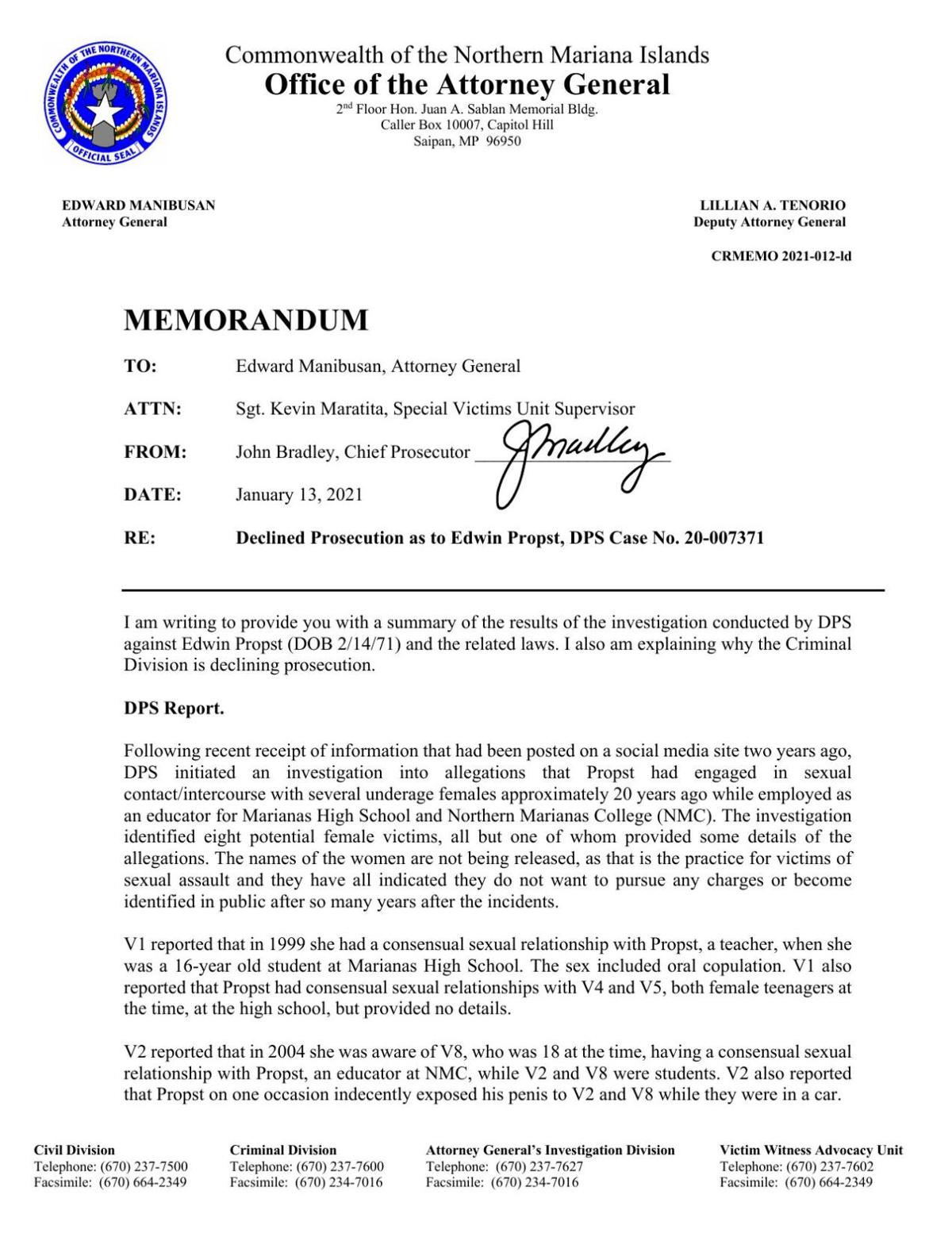 Should the CNMI reopen to tourists in February?