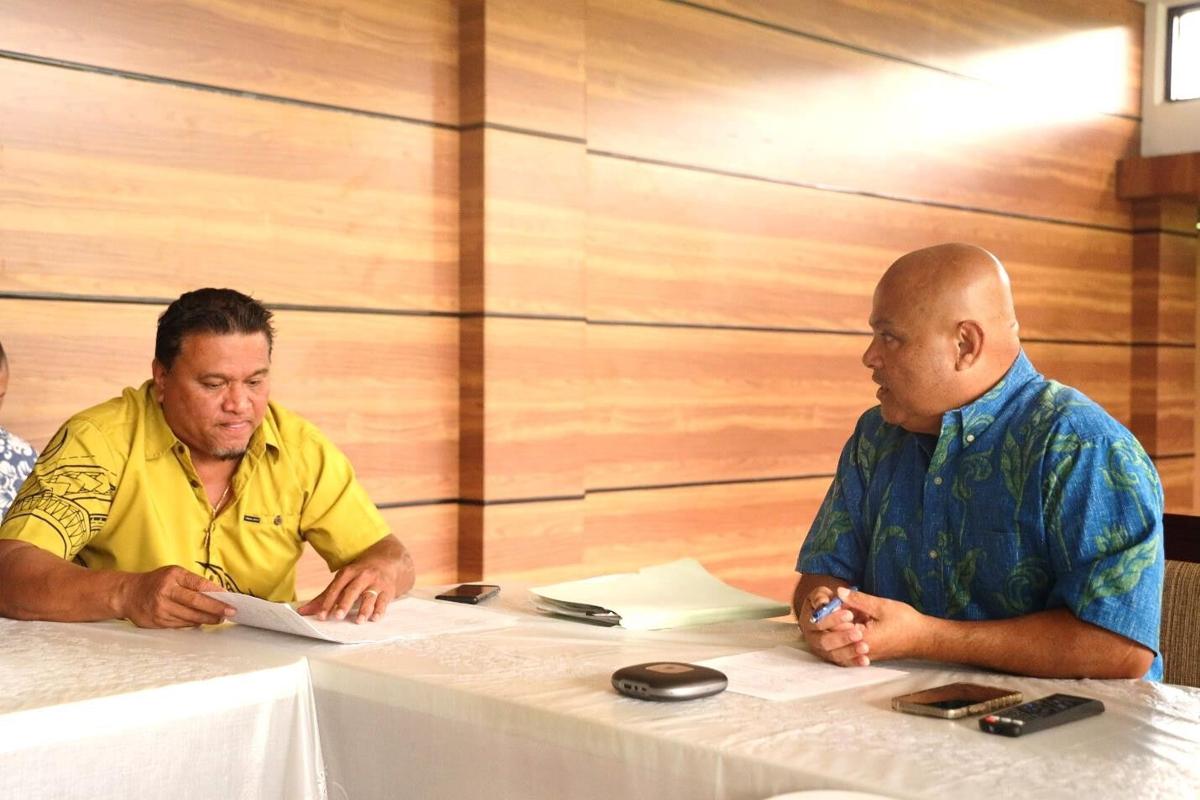 FSM President David Panuelo, right, describes to Sen. Ferny Perman the importance of receiving funding for a chief of staff at the nearest opportunity. 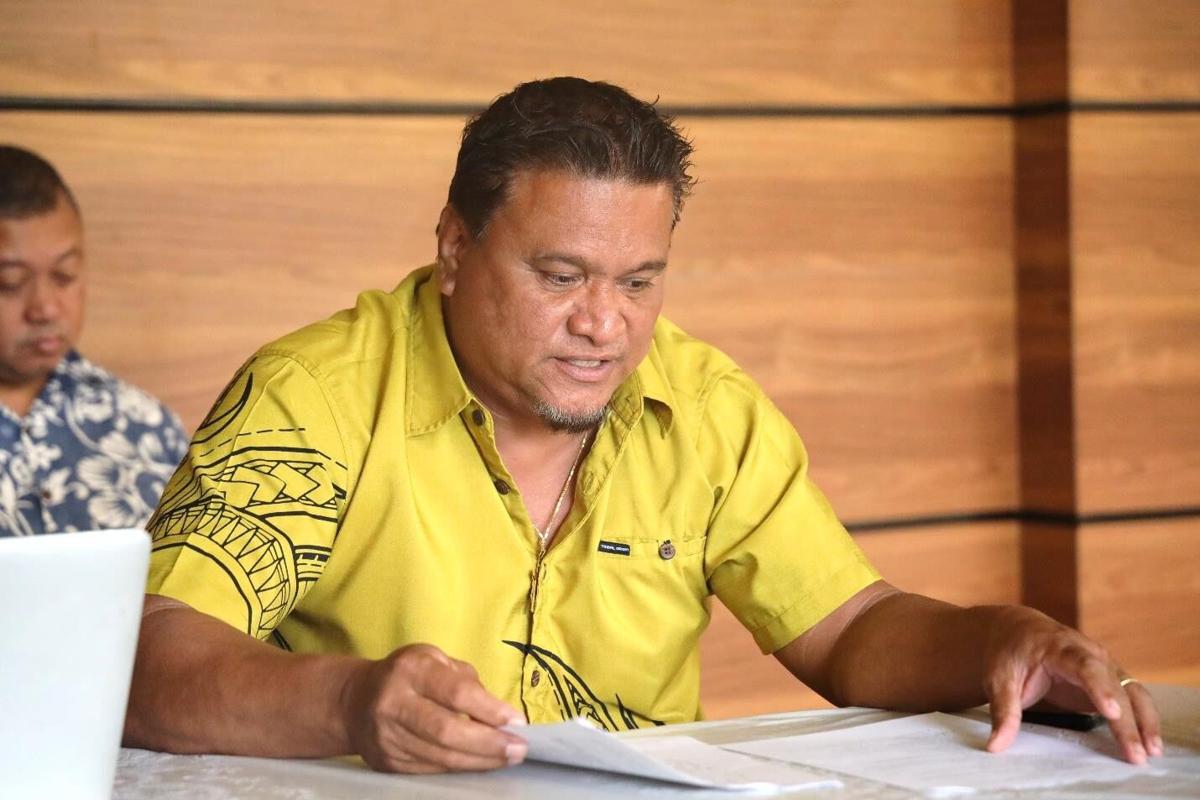 FSM Sen. Ferny Perman reviews his notes as he seeks  more details about the airport renovation projects in Ta, Woleai, and Onoun. 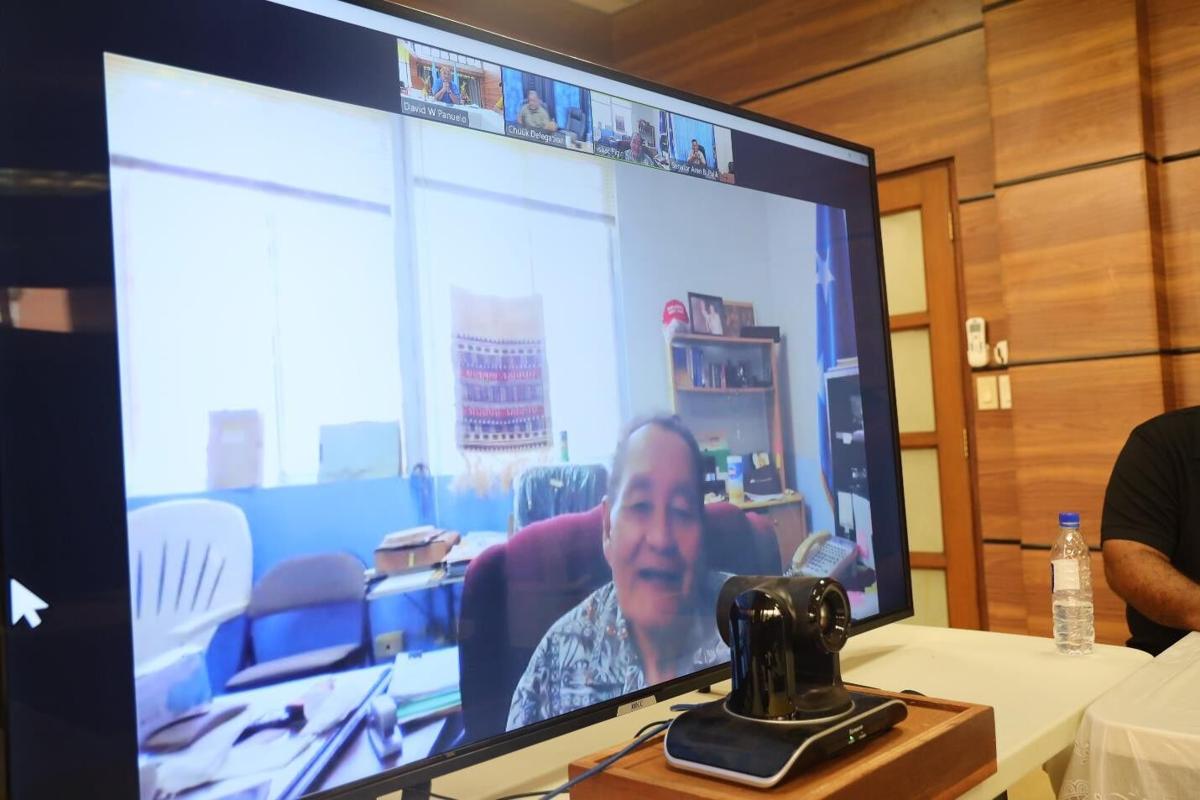 FSM President David Panuelo, right, describes to Sen. Ferny Perman the importance of receiving funding for a chief of staff at the nearest opportunity.

FSM Sen. Ferny Perman reviews his notes as he seeks  more details about the airport renovation projects in Ta, Woleai, and Onoun.

Afterward, FSM President David W. Panuelo virtually received the Committee to Wait on the President chaired by Sen. Ferny S. Perman and whose members are Sens. Aren B. Palik, Isaac V. Figir, and Robson U. Romolow.

The next topic of discussion was the Covid-19 pandemic. President Panuelo noted that more than 70% of the FSM’s adult population is fully vaccinated, and that the FSM has recently received the capacity to implement booster shots of the vaccine, as well as providing the vaccine to children aged five years and up.

The president advised Congress that, to his understanding, the states of Yap and Kosrae are ready to implement the pediatric vaccines immediately, and that the states of Chuuk and Pohnpei intend to begin this process in the coming weeks.

The Covid-19 vaccine mandate remains in effect and, by extension, all children aged between 5 to 11 years and all adolescents aged between 12 to 17 years will be required to be vaccinated against the virus.

The next topic of discussion was the various supplemental budget requests. The president asked Congress to consider appropriating $600,000 to the Department of Transportation, Communications, & Infrastructure  and Caroline Islands Air so that the FSM can purchase two aircraft to replace those that crashed in Mwoakilloa and Ta.

Additionally, the President requested funding for the hiring of consultants to assist the Department of Environment, Climate Change, & Emergency Management in writing proposals and concept notes to access resources from the Green Climate Fund, and for office-space related funding for the United Nations Multi-Country Office and the Secretariat of the Pacific Community.

The final topic of discussion was with regards to various pending bills. Though the president spent the bulk of the meeting advocating on the importance of extending maternity leave from six weeks to twelve weeks, the president also noted that the executive branch has submitted proposed legislation on the Freedom of Information, Cybersecurity, non-communicable diseases, passport extensions, bunkering and provisioning of vessels, penalties for the importation of prohibited plastic materials, legislation to enhance the secretary of Finance’s tax enforcement capacity, the Rome Statue of the International Criminal Court, the safe release of sharks, the Maritime Surveillance Revolving Fund, and a law for the registry of nonprofit corporations.

Following the president’s formal agenda, he entertained questions from the senators on topics ranging from the status of airport renovations and inspections to the usage of the funding appropriated for the Low-Income Household Assistance program.