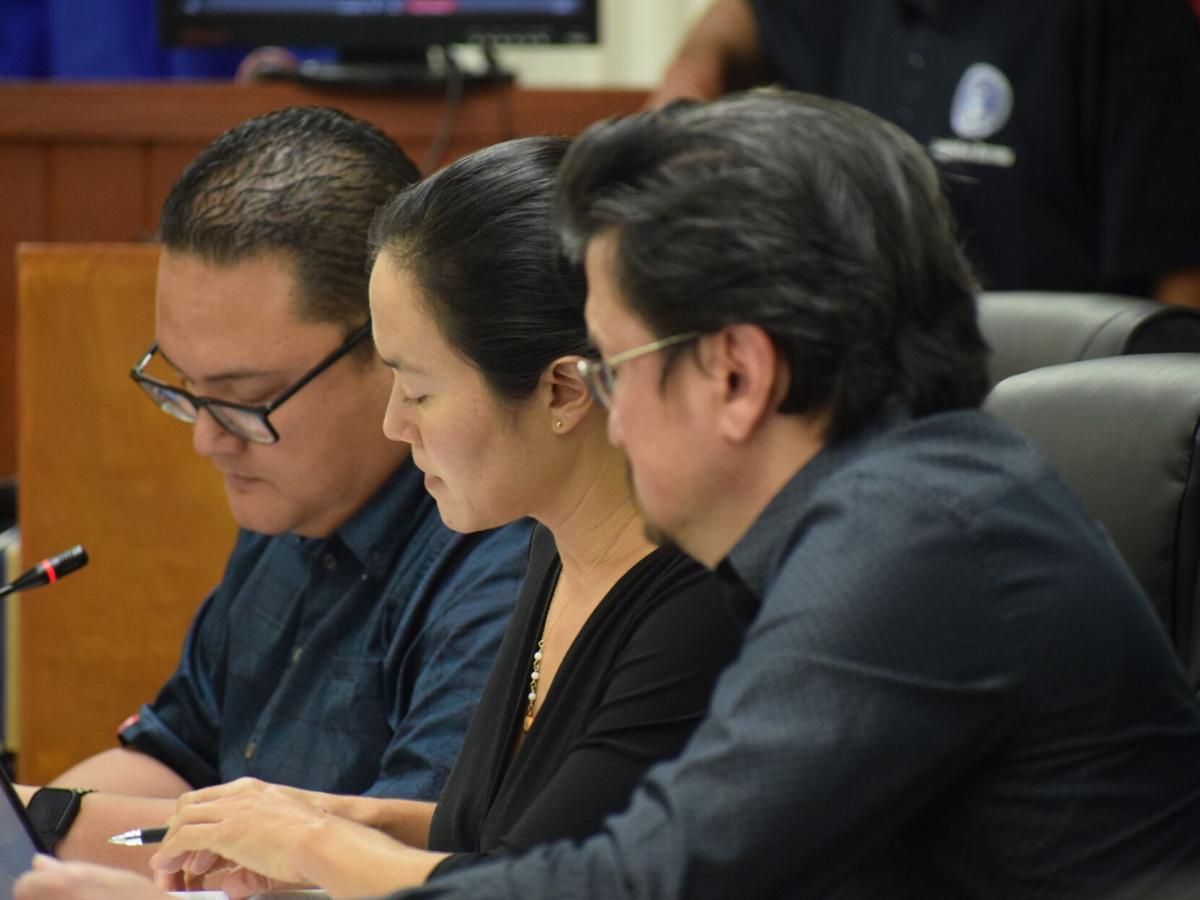 From left, Reps. Donald Manglona, Tina Sablan and Edwin Propst check a document during  a public hearing conducted by the House Committee on Judiciary and Governmental Operations on Friday. 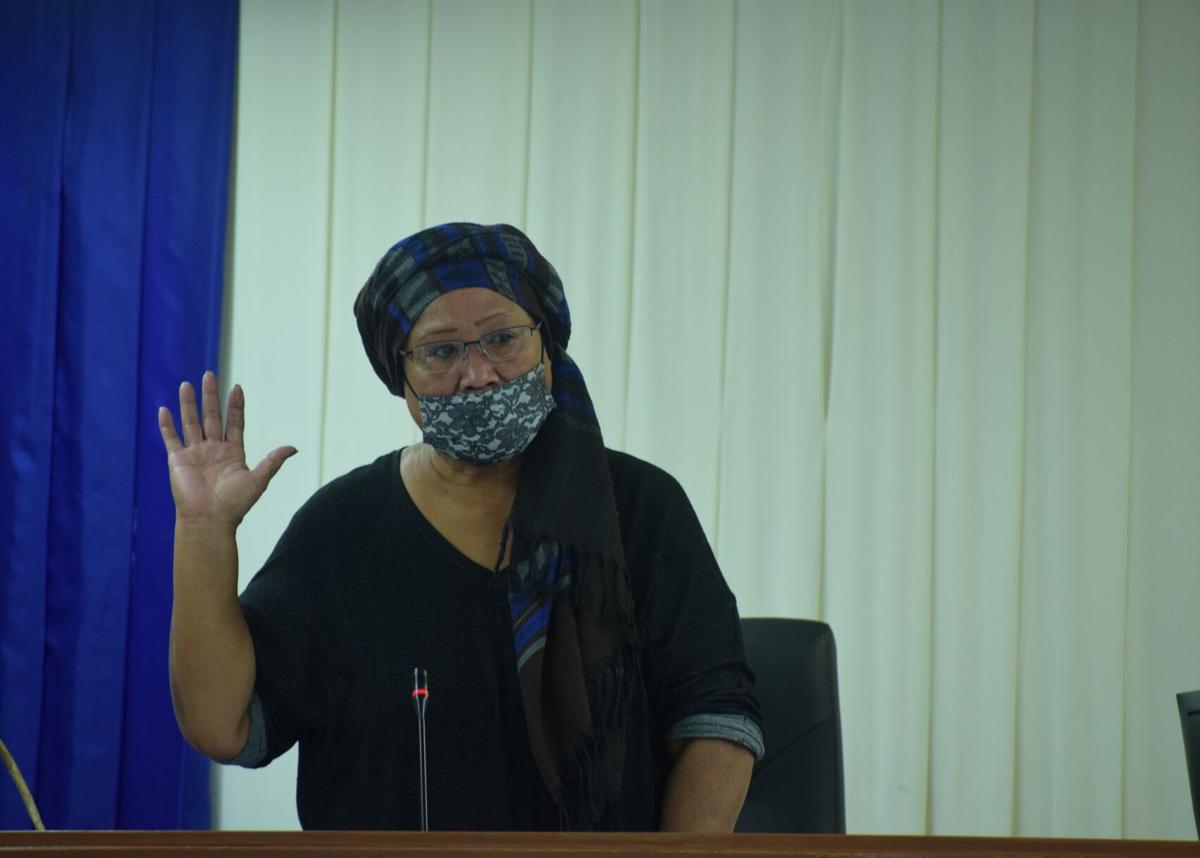 Certified translator Florence Kirby is sworn in at the beginning of the hearing on Gov. Ralph DLG Torres' public spending conducted by the House Committee on Judiciary and Governmental Operations on Friday.

From left, Reps. Donald Manglona, Tina Sablan and Edwin Propst check a document during  a public hearing conducted by the House Committee on Judiciary and Governmental Operations on Friday.

Certified translator Florence Kirby is sworn in at the beginning of the hearing on Gov. Ralph DLG Torres' public spending conducted by the House Committee on Judiciary and Governmental Operations on Friday.

THE resumption of the House committee hearing on some of Gov. Ralph DLG Torres' public expenditures triggered a heated argument between the witness’ lawyer and the House legal counsel who, at one point, accused the witness of “prolonging” and “disrupting” the proceedings, which, he said, could be “grounds for contempt.”

Special Assistant for Administration Mathilde "Keko" Rosario appeared again on Friday before the House Committee on Judiciary and Governmental Operations to continue answering its members’ questions.

This time, the committee, chaired by Democrat Rep. Celina Babauta, asked her about music entertainment devices, camping equipment and other gadgets for which the lawmaker said the governor was reimbursed after buying them from Walmart in Boise, Idaho and In Motion Supermarket at San Francisco Airport.

The committee showed Rosario copies of receipts for these items. On each receipt, there was a handwritten note that read, "for office use.”

With Rosario was her legal counsel, Viola Alepuyo. In the gallery were Rosario's family members and a few administration officials.

She says, he says

As in the hearing on Thursday, the questions on Friday were translated into Chamorro, and Rosario answered in Chamorro.

This, once again, triggered lengthy discussions and arguments on what the law says about translations during an official government proceeding.

When the committee members addressed each other in English, Rosario's legal counsel, Alepuyo, objected.

Where’s the sense in translating the lawmakers’ questions but not their statements? she asked.

She cited the CNMI Supreme Court’s decisions in Jasper v. Quitugua (1999) and CNMI v. Peter Deleon Guerrero (2003) for her proposition that Rosario is entitled to speak Chamorro.

The committee members said they “totally agree” with Alepuyo.

“These cases actually stand for the opposite of what Viola [Alepuyo] said.  They stand for the proposition that the [committee] chairwoman has the authority to make the decision to use a translator or not use the translator.  There is no right to have the proceedings entirely in Chamorro,” Taijeron argued.

You’re taking it out of context, Alepuyo replied.

“I respectfully submit that this [hearing] is an official function where the culture and the traditions of the people of the CNMI must and should be recognized, to include the absolute and fundamental right to speak and be spoken to in Chamorro….,” she said.

“Both in Jasper and Deleon Guerrero, the court specifically said it does not matter if the person is fluent in English; it doesn’t matter whether she can read, write or speak in English; that fundamental right exists. Now you cannot tell Ms. Rosario that she can only exercise half of her constitutional right….”

Alepuyo also told Taijeron that Rosario had been respectful in her responses to the committee members’ questions. “Just because you don’t like her responses, doesn’t mean she hasn’t responded to the question,” Alepuyo added.

Propst said, “Just for the record…if you look at what [Rep.] Tina [Sablan] has stated, she addressed, ‘Madam chair and colleagues.’ She was talking to the chair and her colleagues…. Then, after that was done, she addressed Ms. Rosario. Everything before that was to address the chairwoman and her colleagues. That was what was stated. So we are not denying the right to translation, or interpreter for anyone to speak in either [of the CNMI’s] three [official] languages. However, the translation that was being made was for the question that was being addressed to Ms. Rosario,” he said.

Alepuyo said her client needed to understand the statement addressed to her or the statement made before the questions were asked.

“If you guys want to have conversations amongst yourselves that do not refer to her, that’s fine,” Alepuyo said. “You can have that in whatever language you want, but as she is exercising her rights, those [statements pertaining to her] must be in Chamorro,”

Taijeron then asked Alepuyo — “against his better judgment" —  to respond to just a particular paragraph of a court ruling.

But Taijeron insisted that neither Jasper nor Deleon Guerrero creates an individual right to demand that government agencies conduct official business in all three languages.

“With all due respect, we want to hear her [Rosario] speak in Chamorro, no problem,” Teijeron told Alepuyo. “But she is demanding now, and you are demanding as her counsel, that people that are not…comfortable in the vernacular [should] speak in Chamorro. And if that is not the case, an English question [should] be translated in Chamorro, which is disrupting the flow of the questions because you [Alepuyo] as [a] non-certified translator are interrupting the certified translator's translation,” Taijeron said, referring to Florence Kirby.

“We have different translations, we are all experts in Chamorro, but there is only one certified translator in Chamorro sitting here, and that is Ms. Kirby — she is not perfect, no one is perfect here,” Taijeron said.

“Do you have rules on that Mr. Taijeron?” Alepuyo asked.

“We have rules that the chairwoman rules, and she has been interrupted by you, many times,” he replied. “So with all due respect, we are asking nicely, if she [Rosario] actually has a bona fide English proficiency problem, which I sincerely doubt, [then] she may express that lack of understanding, and we are happy to translate it in Chamorro — more than happy — but when she is simply asking us to prolong the proceedings, to disrupt the proceedings, that may be grounds…for contempt. And no one wants to go there. She is a nice lady, and we all are in this unfortunate position. So if we kindly proceed with an orderly investigation, if she sincerely has an English proficiency issue, we will be more than happy to translate questions, but not for your convenience and not to prolong the proceedings. Thank you,” Taijeron said.

The committee chair, Rep. Celina Babauta, then recognized Propst who said: “This is an investigation into the governor's spending, and not an investigation whatsoever on Ms. Rosario's professionalism or career or her job.”

“We certainly are not questioning that and by no means that we are trying to discredit the witness today,” he added.

“And we do hope that cooler heads will prevail and that we continue.”

'I have not seen them'

The hearing then proceeded with Sablan asking Rosario about the items the governor bought in the U.S. for which he was reimbursed.

Asked in English and translated into Chamorro if she had seen a JBL Boombox in the governor’s office, Rosario answered in Chamorro: I don’t know how it looks like.

On a big screen, the committee showed Rosario a picture of a JBL Boombox and Sablan asked her again, translated into Chamorro, if she had seen it in the governor’s office.

Rosario answered: No, I have not seen it.

Asked if the JBL Boombox was on the inventory that she submitted to the bipartisan House Special Committee on Fiscal Review of Executive Expenditures last year, Rosario answered in Chamorro: Yes, I saw it in the inventory on Aug. 20, 2020.

“And for which office [is that boombox]?” Rep. Tina Sablan asked.

Office of the Governor, Rosario said in Chamorro.

This was translated by Kirby as: “It was in the governor's office.”

Alepuyo objected to the translation, saying, “Correction, madame chair. She said ‘Office of the Governor.’… We just want to make sure that that’s clear.”

For each item, Rosario gave the same answer: I have not seen it, but she also said that each of the items was on an inventory.

Babauta asked Rosario if the governor has a satellite office in Idaho. Rosario answered: I don't know.

Sablan asked Rosario if the items the governor bought in Idaho “made it to Office of the Governor on Saipan.”

Rosario answered, I didn't see them in the inventory.

Asked by Sablan if those items were needed by the governor’s office, Rosario answered: It's not necessary for them to be at the governor's office.

Rep. Richard Lizama asked Rosario if she thinks that the items bought by the governor were for office use or for hunting/camping.

Rep. Celina Babauta said the hearing would go on recess and resume on Monday at 1:30 p.m.

Alepuyo, however, said her client has a medical appointment on Monday at 2 p.m., and that she was advised that “it may last all day.”

Babauta then set the resumption of the hearing for 1:30 p.m., Tuesday.

Alepuyo said she has an appointment on Tuesday at 1 p.m., but she should be available at 2:30 p.m.

Babauta said the hearing will resume on Tuesday at 2:30 p.m.