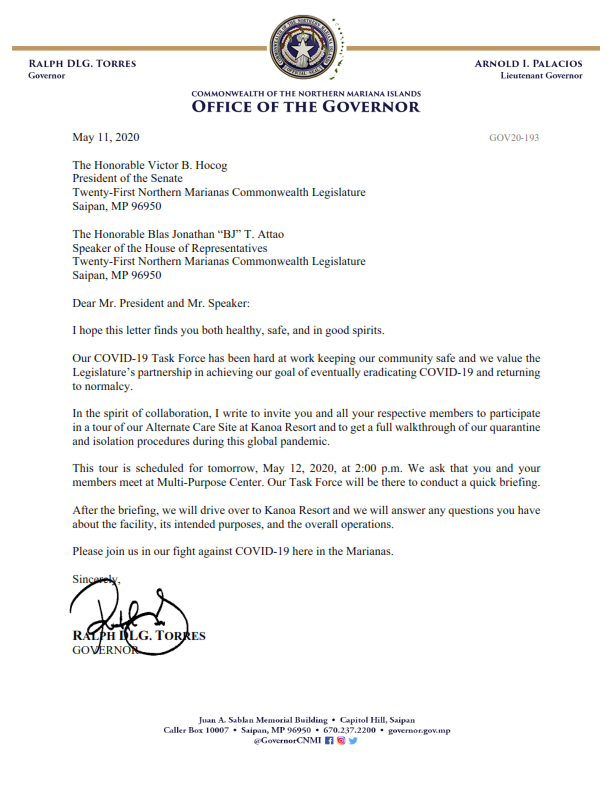 Of the CNMI’s nine senators and 20 House members, only one showed up — Rep. Sheila Babauta.

Upon arrival at the site, every person had their temperatures taken, and were instructed to wear masks.

Torres said, “I am very, very happy with the progress that HBR has made with Helios. I know that in the beginning, the construction company, HBR, literally worked 24/7. They had over 50 staff here working day in, day out. Everybody has worked really hard.”

He noted that the project is nearing completion, and more equipment and supplies are scheduled to arrive in the coming days.

Torres said the facility is a precautionary measure, to prepare for a potential rise in confirmed Covid-19 cases, adding the world is already experiencing its second wave of confirmed cases while the Commonwealth is still in its first wave.

Regarding the funding for the project, the governor said, “When you are talking about health, we do not defer making the right decision because we are short of funding. We are going to make this tough decision. We do not have all of the funding in the world, but we are maximizing the funding we have.”

The governor thanked the combined efforts of multiple partners, including the U.S. Department of Defense.

“The partnership between the CNMI and the DoD is absolutely outstanding,” Elliott said. “We work very well together. In peacetime, we work together to make sure that our forces are trained to protect all Americans, including the folks here in the CNMI. The military is also here in times of crisis.”

He added, “I can tell you that from my observation, there is not a jurisdiction in the United States that is doing as good or better than the CNMI. The CNMI is really at the top, and you can see that in how few cases there are and how few fatalities there are.”

She added, “This is very reassuring, and I hope that it also provides some reassurance and peace of mind for community members that our leaders and business community are responding accordingly, and trying to stay ahead of the virus and the impact on our Commonwealth.”

She said she appreciates the thoughtfulness behind the plans, including the wide window panels that are intended to help isolated patients feel more at ease.