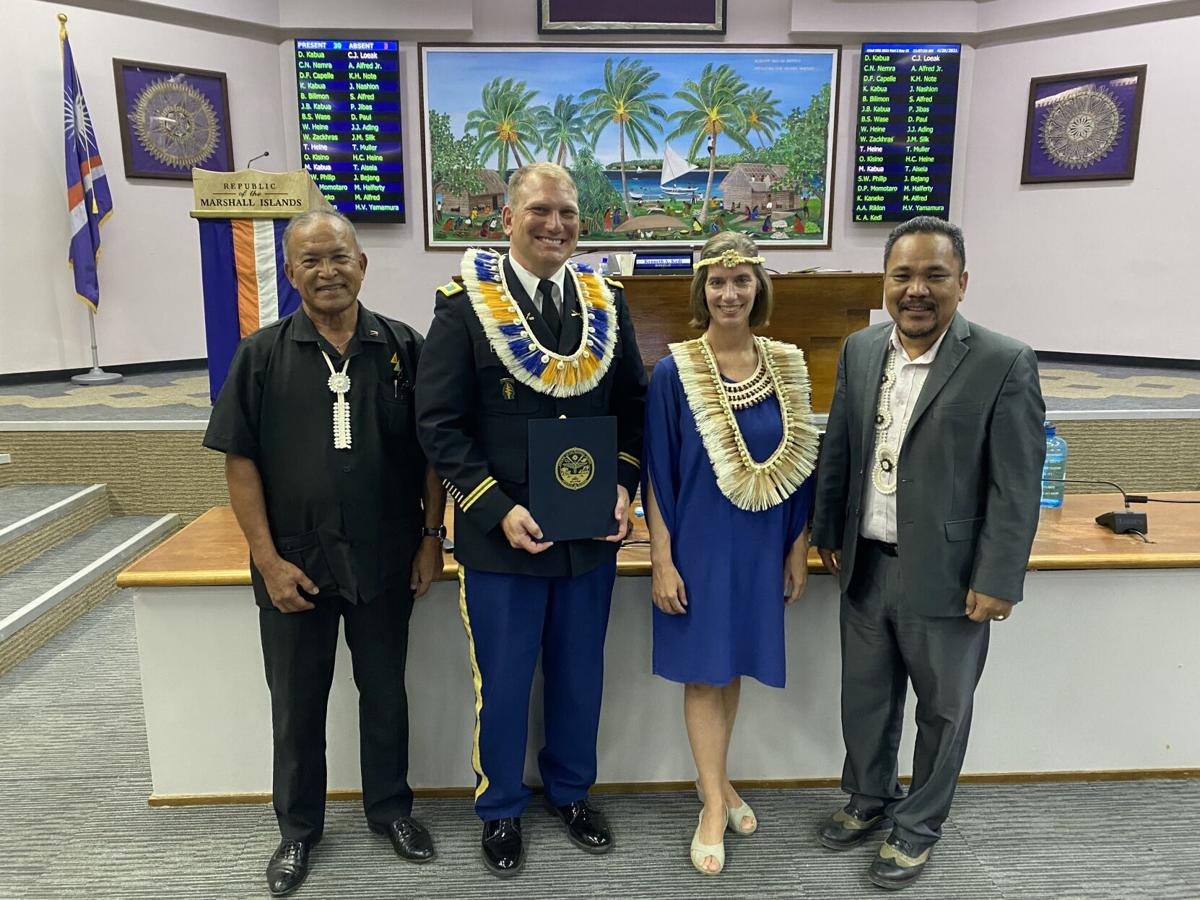 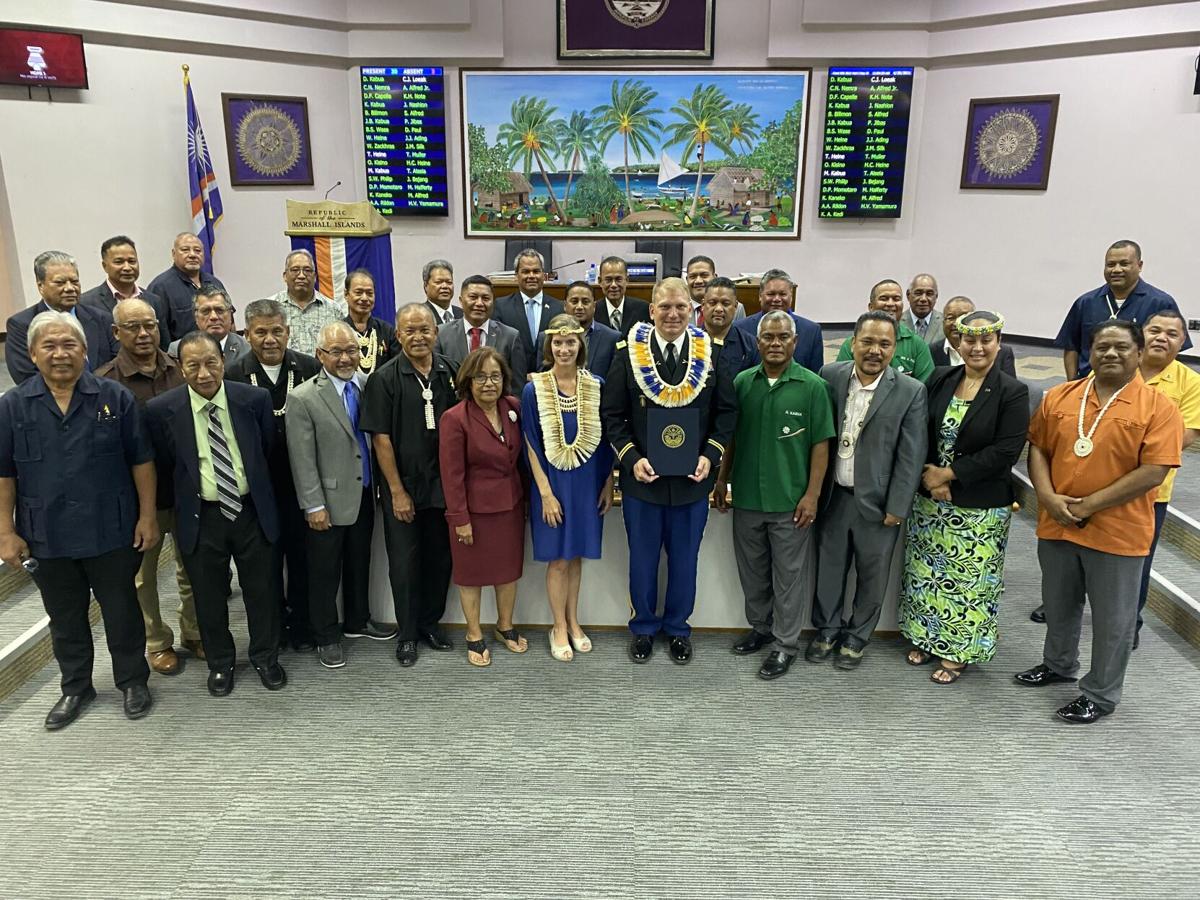 Following an extended and unprecedented ceremony to honor U.S. Army Col. Jeremy Bartel, center, with U.S. Ambassador Roxanne Cabral to his right, the entire membership of the Nitijela, Marshalls’ parliament,  joined them for a group photo.

Following an extended and unprecedented ceremony to honor U.S. Army Col. Jeremy Bartel, center, with U.S. Ambassador Roxanne Cabral to his right, the entire membership of the Nitijela, Marshalls’ parliament,  joined them for a group photo.

MAJURO — Marshall Islands hospitality and warmth was on full display Monday during a special recognition ceremony for the United States Army commander of the Kwajalein missile range.

U.S. Army Col. Jeremy Bartel was called to honor by Nitijela (parliament) Monday in what Speaker Kenneth Kedi said was an unprecedented ceremony in the chamber to recognize Bartel for his contributions to the Marshall Islands.

Bartel, who commands the U.S. Army Garrison-Kwajalein Atoll, flew into Majuro Monday for the ceremony in the chamber and was joined by U.S. Ambassador Roxanne Cabral for the event.

The Nitijela’s last day of a session that started in January started off as usual with roll call and preliminaries, but quickly shifted to skipping ahead to the resolution section of the agenda to allow the members to address Resolution 41 honoring Bartel, who is scheduled to depart the U.S. Army Garrison-Kwajalein Atoll in early July.

Speaker Kedi, speaking from his dais, told Bartel and Cabral who were seated nearby that the resolution was a demonstration of the Marshall Islands’ “unwavering” support and partnership with the United States.

Nitijela member after Nitijela member heaped praise on Bartel for his work with the Marshall Islands on Covid protection and the government’s repatriation program that the Army is supporting. From the launch last October of the Marshall Islands government’s repatriation program, using Army facilities at Kwajalein for quarantine and Covid testing prior to people’s release, 244 people have now been repatriated, mostly Marshallese along with a handful of diplomatic mission staff members.

With Bartel’s Covid response as the “big picture” reason for the Nitijela recognition, numerous members of parliament or MPs chimed in to offer their take on Bartel’s impact on U.S.-Marshall Islands relations during his nearly two-year tenure as the Army’s base commander.

Majuro MP Brenson Wase praised Bartel for coming to Majuro multiple times and taking the time to repeatedly meet with leaders and landowners of Majuro to explain the Army’s repatriation operation so that people were fully briefed and had the opportunity to get their questions answered.

Majuro MP and Army veteran Kalani Kaneko said Bartel was instrumental in supporting establishment of the new American Legion post in Majuro that is supporting the needs of Marshallese veterans who served in the U.S. military.

Mejit MP Dennis Momotaro praised Bartel for his support of the Marshall Islands repatriation program that has allowed families to be reunited at home after months of being stranded in the U.S. since the early March 2020 border closure due to Covid-19.

“You’re a very important part of our Covid success story,” said Health Minister Bruce Bilimon. The Marshall Islands identified four Covid-19 cases in managed quarantine at the Army base last year but has not had any further border cases or any community transmission of Covid-19 to date.

“We don’t recall another colonel to appear before Nitijela for recognition,” said Foreign Minister Casten Nemra. “It is rare indeed.” Nemra described Bartel as a professional who didn’t sugar coat his discussions. But in partnership with Bartel, “there was always a way, a solution,” said Nemra.

Kwajalein MP David Paul was called up to the front to present brief remarks on behalf of the Kwajalein leadership. In addition to Bartel’s partnership with the Marshall Islands managing the Covid pandemic, Paul said relations and cooperation between the American and Marshallese communities at Kwajalein Atoll are “at an all time high” because of Bartel’s leadership.

In another break with tradition, Speaker Kedi instructed Clerk Morean Watak to read Resolution 41 in its entirety. Usually the announcement of bills and resolutions on the floor is limited to a reading of their titles only. The resolution expressed the “deep gratitude” of the government and people of the Marshall Islands to Colonel Bartel for his tremendous support and commitment to protecting lives and providing essential services during the ongoing national response to Covid-19.

Often resolutions are approved by voice vote only. In this case, MP Paul requested a roll call vote, which allowed each member to cast their yes vote and many took the opportunity to further recognize Bartel in brief comments or simply look across the chamber to him and say, “thank you Colonel Bartel.” The result? Resolution 41 passed unanimously, 29-0.

Speaker Kedi then recessed the session to allow for the MPs to join with Colonel Bartel and Ambassador Cabral for photographs, followed by a sumptuous lunch in the Nitijela conference room.

Do you plan to get the Covid-19 vaccine?