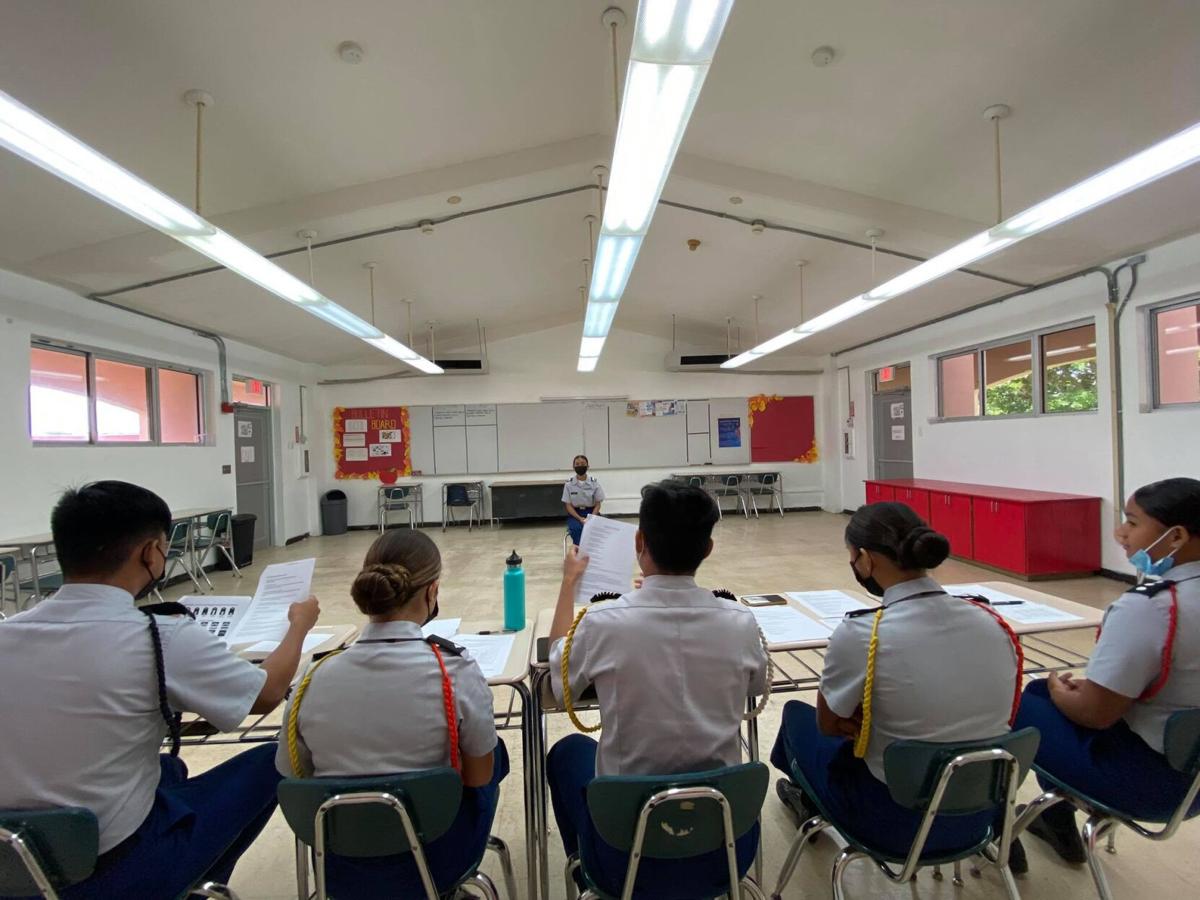 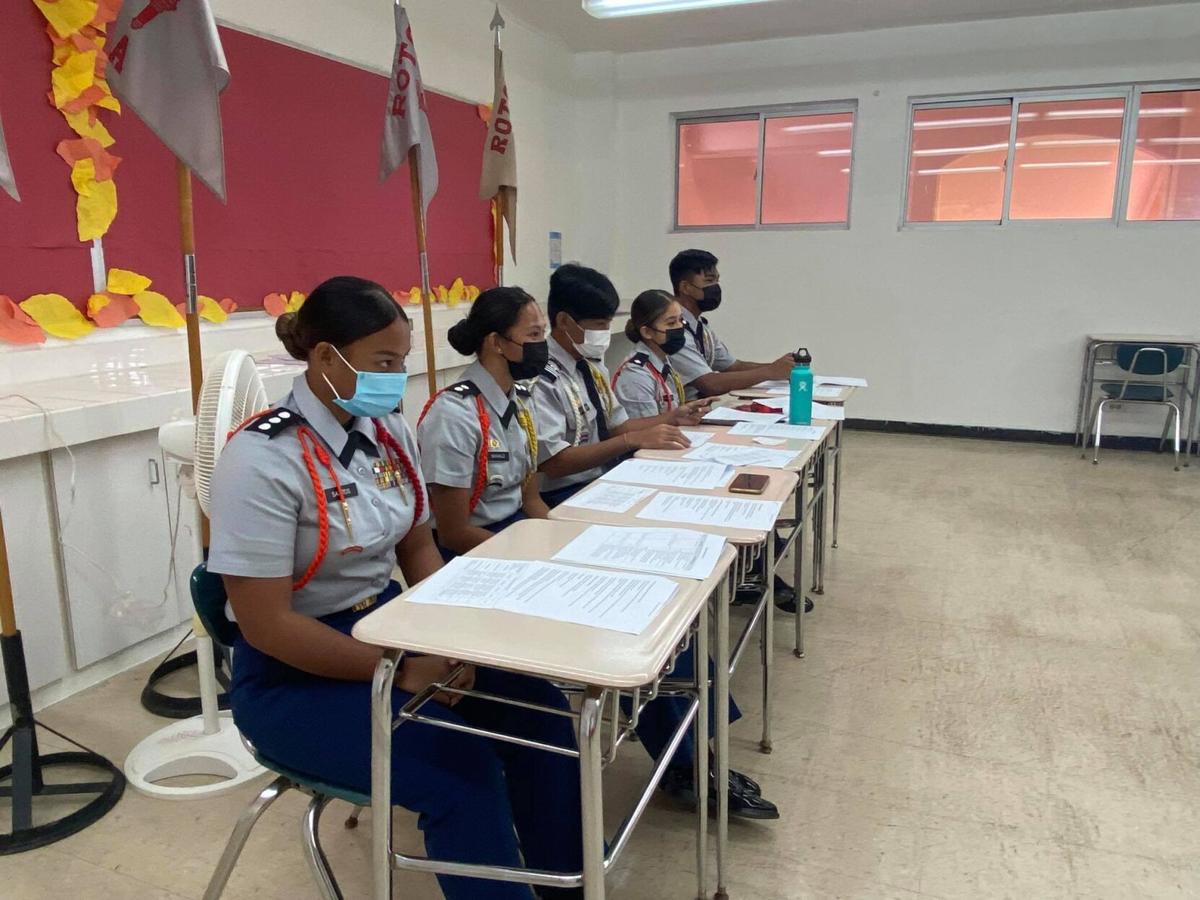 The Tinian JROTC Promotion Board. 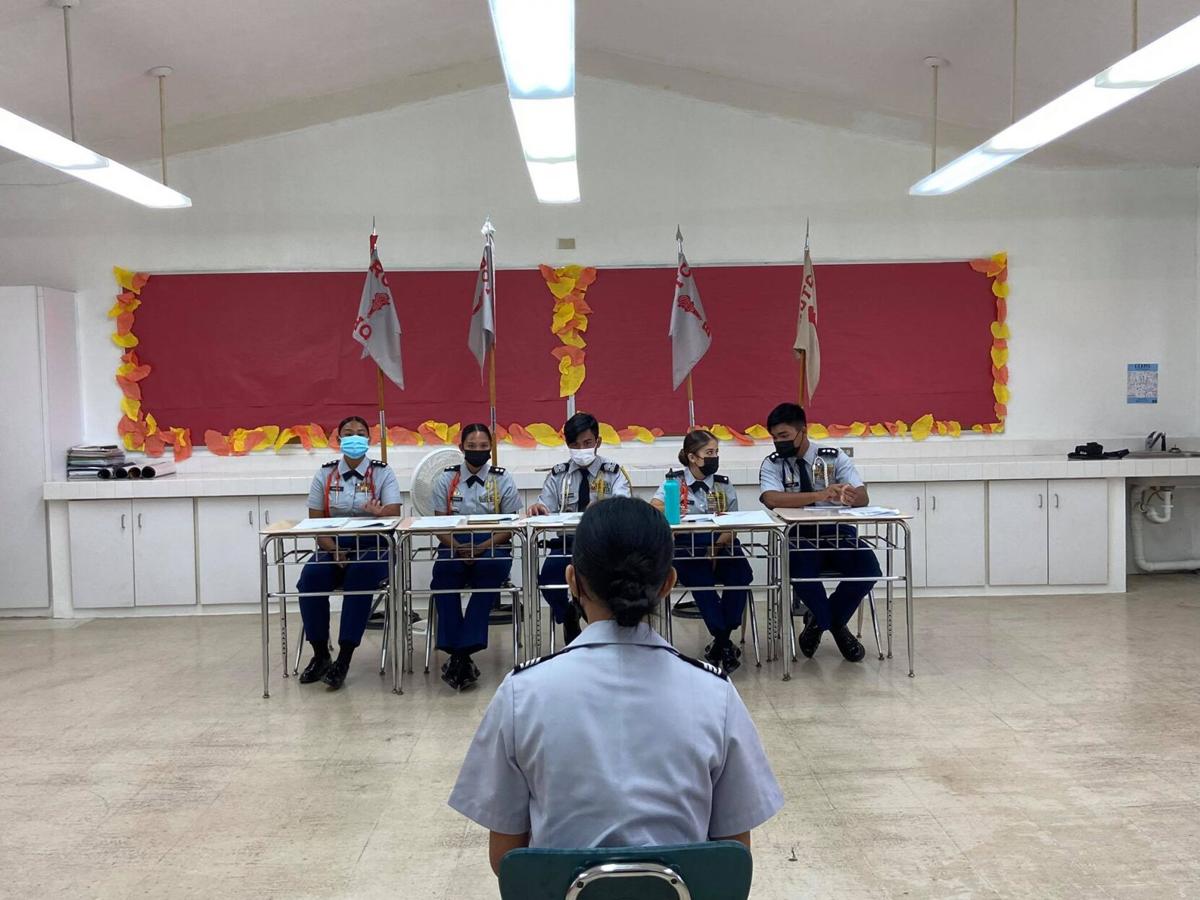 The Tinian JROTC Promotion Board.

TINIAN — After facing the hardships and challenges that Covid-19 has brought, the Tinian Stallion Battalion was finally able to hold a proper Promotion Board after being canceled for nearly two years. The Stallion Battalion held their previous promotion board back in 2019 before the onset of the Covid-19 pandemic.

As students started coming back to school with an asynchronous schedule, it was challenging to hold a proper Promotion Board as students were spread out on different days. But with the opening of the new school year and Tinian High School going back to full-time face-to-face learning, the Stallion Battalion was able to bring back its official Promotion Board.

In a Promotion Board, cadets are interviewed on a series of questions regarding the past lessons that they have covered while taking their JROTC classes. They are also required to have good knowledge about leadership skills, problem solving, commanding, and a good understanding of the position that they are applying for. Each cadet is assessed by the battalion’s top three cadets, such as the battalion commander, battalion executive officer, command sergeant major, and other high-ranking officers within the class.

Throughout the day, cadets were assessed on their knowledge, preparing day and night to get a chance to seek a higher position in the Battalion. Many of whom stayed back after school, waiting for their chance to be called in. We’ve asked some of the cadets about their experience in the Promotion Board.

All the cadets that we’ve asked shared similar thoughts about entering into the Promotion Board.  For Cadet Corporal Elaiza Songco, she commented, “I was so scared and it was nerve-wracking because this was my first time. But it was actually fun and it wasn’t scary if you studied.” When we asked her about what she did to prepare for this event, she remarked, “My classmates encouraged me to promote and I thought about it like a lot. I helped others to study which helped me prepare when it was my turn to be called up.”

As the cadets were called in, they were asked questions assessing their understanding about the JROTC Program. Cadet Sergeant Tano King noted, “They asked me a few questions and asked me to march around a chair while I am commanding myself. They also asked me “what are your winning colors” “can you spell your name in the phonetic alphabet” and so much more.” He added “I think I need to work on my confidence just a bit more because at one point, I hesitated to answer a question and I think it took some points away from my overall score.”

In the end, many cadets were able to rank up, and some saw this as a way to improve themselves next time, when this is held again. Cadet Staff Sergeant Gierome Ebora stated, “I’m gonna work on my bearing and show that I’m confident and do this better next time. And have more fun doing it.”

Cadet Major Emiliana King is the stallion battalion’s executive officer and is one of the officers who assessed cadets when they entered for Promotion Board. When asked about her thoughts about bringing back this old JROTC tradition, she remarked, “I am more than happy that Promotion Board is finally back in this program! I am also very excited because I am now a senior cadet; meaning that I play a huge role in the promotion board process. Plus, seeing all of my subordinates study hard and pass the board really does make me proud of them and their efforts.”

When we asked her to reflect about all the cadets’ performance, she stated, “Honestly, the cadets did an outstanding job! I can tell that most, if not all, of them were extremely nervous but they all managed to push that feeling aside and bring out confident and thorough answers. Seeing that desire to promote through this board as a senior cadet and as a board member really made me feel nothing but gratitude towards the cadets’ motivation.”

Despite the challenges that was faced the previous year, the Tinian Stallion Battalion was able to hold a successful Promotion Board, reviving the old tradition after two years of being postponed by Covid-19. Cadets who were able to pass the Promotion Board assessment were able to rank up to a higher position on Oct. 4 during the change of command ceremony. The Tinian Stallion Battalion would like to congratulate all the cadets that took part in this event and is excited to hold another Promotion Board in the coming months.